In this world, each individual has access to Internet and is enough digital savvy to have a great influence on its social and economical environment. Each individual, fully aware of the ecological impact on our planet, generated by 60 million tons of yearly electronic waste, should be able to clean and preserve its environment. We have in this world a perfect equality between rich and poor persons, and between Digital Natives 1 and Digital Immigrants 2 in what concerns the access to the ICT 3 … May be this world will never leave the dream realm to become reality …

Actually, is our world nothing but Utopia ?

Since year 2011, the Emmabuntüs collective did set up its own GNU/Linux distribution named Emmabuntüs in order to simplify the refurbishing of aging computers, which are given to humanitarian associations. The first goal of this collective is to expand the life span of the electronic devices, and – by doing so – dramatically reduce their waste. Reminder : only 10% of the waste is recycled.

Hello, I am Emmabuntüs ! Test me out !

In September 2014, a new association named THOT Cis was born in Binic (French  Côtes-d’Armor) with the following main goal : give a computer to everyone. Recognizing that some unprivileged social groups don’t have an easy access (understatement) to Internet and/or had never touched a computer, the idea is to give to those with limited financial resources, the opportunity to buy affordable computer equipments, so they could as well, communicate, be informed and have access to knowledge. The scope of the association expands to the ’e-inclusion4 implementation, the digital gap reduction and the environmental protection. 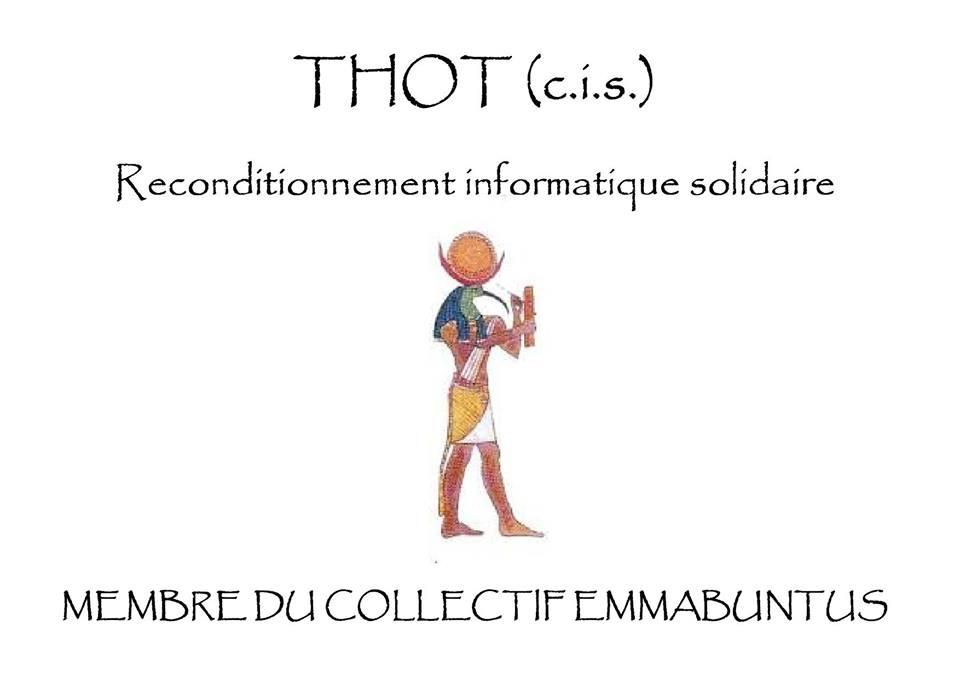 Logo of the THOT Cis association

Besides that, the THOT Cis association is working hard to increase the public awareness of the computers end of life issue, and demonstrate the available reuse solutions. During these awareness-rising sessions the association members do not hesitate to educate parents and children on Internet risks. Because we must admit that there is the other side of this beautiful coin : beyond its wonderful capabilities in terms of search tools, information, communication, trading, and data storage, Internet can be hazardous. This leads to bad practices, addictions, paper book desertion, spirit of laziness of the young fans of the cup and paste method. Whether in the process of making the digital experience accessible for everyone, or in conducting awareness-rising sessions, or when protecting the environment, the Thor association receives help from several partners.

Among them, the Department House of Côtes-d’Armor is a major supporter of the association to realize its objectives.

(Note of the translator) Thoth was one of the deities in ancient Egypt and played a major role – among several – in the mythology by maintaining the universe, and the development of sciences.