Eight years spent weaving its web beyond its boundaries, disseminating ideas on computers, on technologies and on social actions, thanks to its couple of antennae; and a couple of eyes to understand the mysteries of the world around, in order to better serve it; and a couple of wings to better cover the world through accessibility and humanitarian mapping parties; three couple of legs to better grasp the transmission of the free (as in freedom) software and better cope with all the encountered difficulties : this is how is made our Dragonfly [Libellule in French] Montpel’libre

In 2008, the free software experienced an exponential growth. More and more individuals, companies and institutions adopt this idea. An increasing number of events around the free software germinates around the world with the goal of promoting the Libre Software and defend its interests. Because it must be said that things did not always look so rosy for these missionaries.

The Montpel’libre association was born December 2nd 2008 with the goal to establish – for the free software – a large freedom of usage, an equality in its utilization and the brotherhood needed to link all users together. Since then, this association is comprised of 25 active members, 65 participating members, and a galaxy of volunteers, constantly struggling to demonstrate the high value of the free software as a common good.

In addition, the association also cares about equally important topics like strong social and solidarity economy, social and digital innovation, sustainable development. Hence the great diversity of the members: novice Monpel’librists , designers, lawyers, hikers, gardeners. This diversity demonstrate that the association is not only a network of geeks and computer scientists, but a tremendous asset by itself.

The solidarity which stands out of the digital world activists in general and the members of Montpel’libre in particular, is even more visible during these last days with the unconditional support given to one of them, CELLOU DIALLO, a very active volunteer who was part of the organization team during several Montpel’libre events, and various other associations. One could see all these Libre Software advocates and proponents of the social and community grouping, huddle together – like one herd of antelopes – to defend one of them and let him free of the justice machinery and have his administrative status regularized. 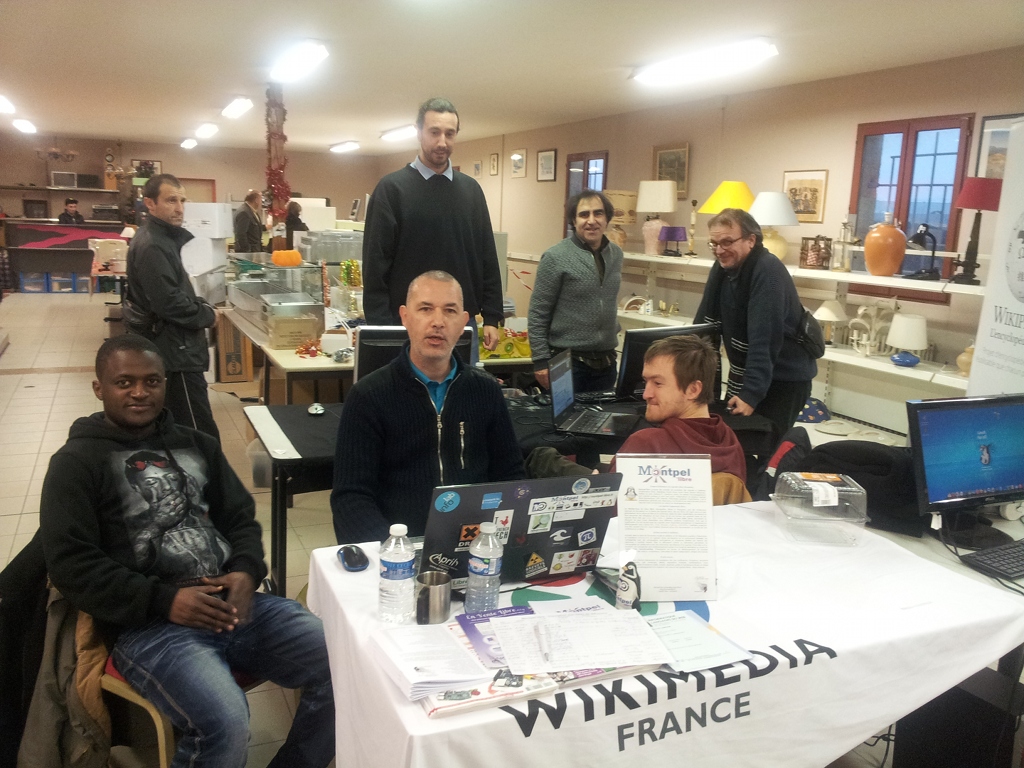 The Montpel’libre team during a free software demo within the Emmaüs community of Montpellier in December 2015.
On the photo, from left to right, are : Cellou, Pascal, Quentin. In the background : Romain, Patrick (of Emmabuntüs) and François (of Multisystem). Missing in the picture : Nicolas et Cédric.

As true as freedom goes hand to hand with equality, the Montpel’libre association attaches great importance at the free software accessibility for all, as well as various activities aimed at the sharing of ideas. That is how was put in place the participative “mapping parties” targeted at the accessibility for people with reduced mobility, project using the OpenStreetMap tools. By the way, these “mapping parties” have received national and international recognition. Furthermore the association participated at the “mapping parties” in Guinea during the Ebola outbreak, and in Nepal after the big earthquake together with the Humanitarian OpenStreet Map Team and Doctors Without Borders [Médecins sans Frontières].

The association created also the Wikipermanences, the WikiCheese parties in partnership with Wikimedia, the Press Clubs of Montpellier and Nîmes cities, and the Libre Operation for data production in Saint-Martin-de-Londres. 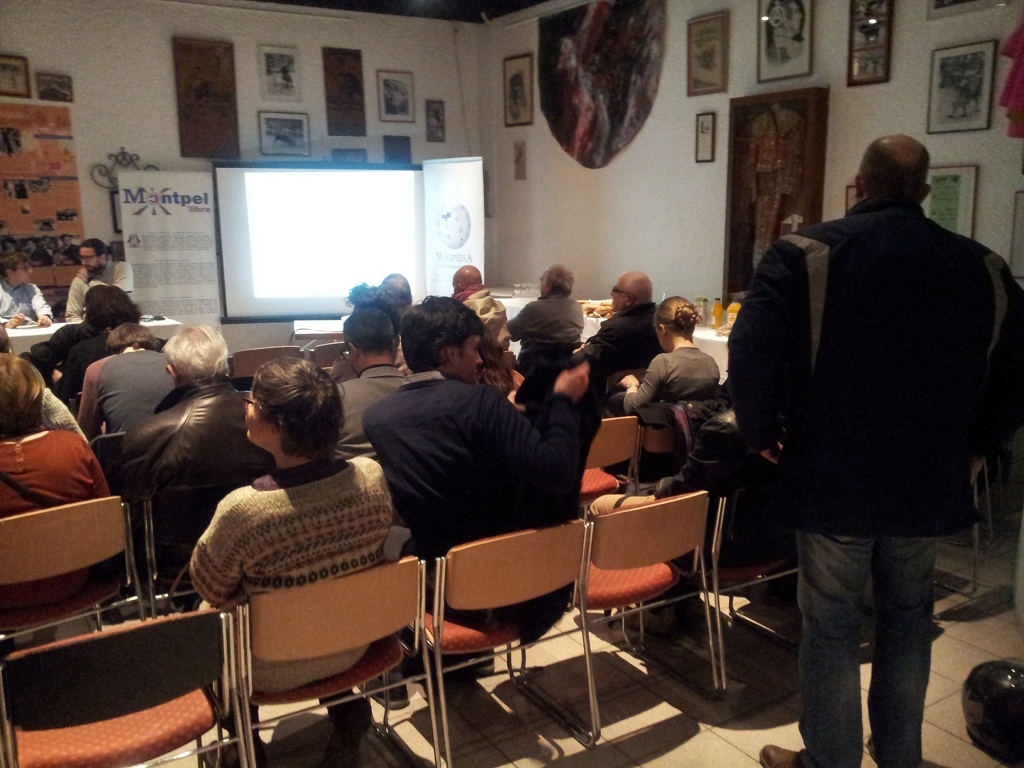 WikiCheese party, in 2016 at Nîmes

The Montpel’libre productions include the creation of a working group on OpenStreetMap and Blender, in partnership with The Special Fairies [Les Fées Spéciales] for film promotion, and the Utopia movie theater.

The association is also part of the organization of international events like the 2014 Libre Software Meeting in Montpellier, for which it coordinated the local groups and organized actions et networks upstream the final event. It hosted also the April camp, the Aful general assembly and the Linagora staging point.

Pascal Arnoux, president of the Montpel’libre association told us that they are all moving toward the free software solutions, either for economical reasons, or strategic choice; and the students interested by a militant approach, as well as the journalists who need access to the free software in order to protect their sources. 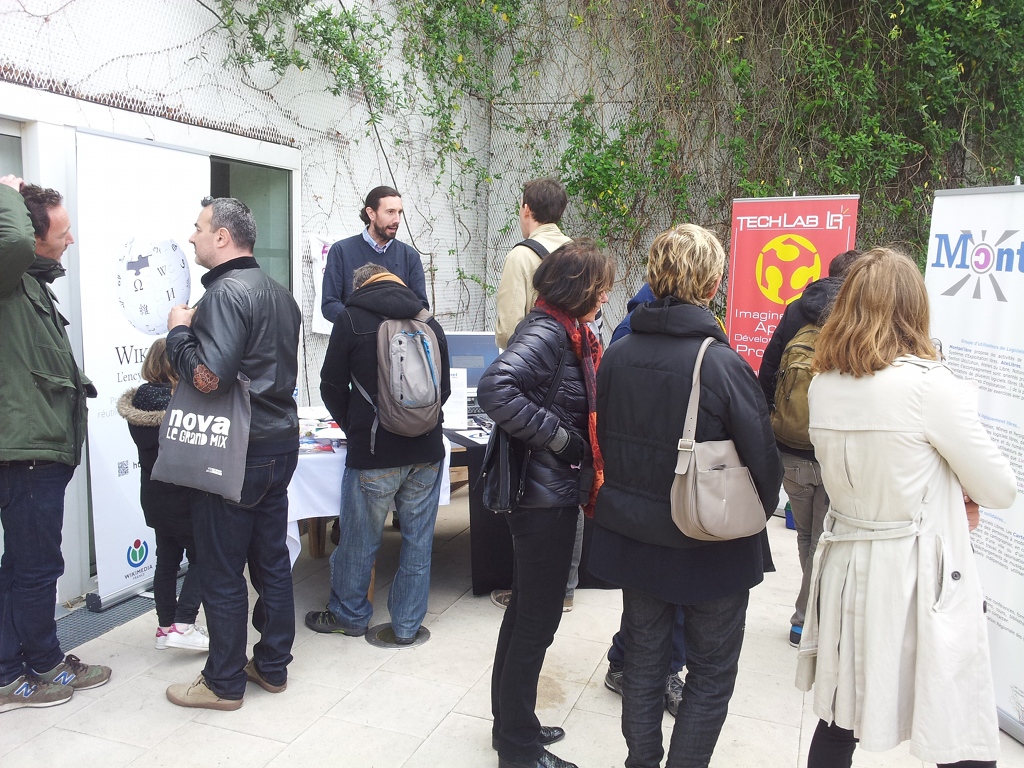 Montpel’libre booth during the 2016 Tropism Festival , within the Open Hack framework.

Montpel’libre uses the Emmabuntüs distribution, which is described as fair and suitable to the libre software concept. But the association also uses other distributions during its “Install-parties” and “Cafés numériques”: HandyLinux, Mageia, Haiku, Tails (for which the association started training sessions on computer security and cryptography), PrimTux…

Despite all the difficulties the association is facing, it is in very good company with all the partners supporting the implementation of its objectives. Listed among others: Emmaüs, Emmabuntüs, le Club de la Presse, Wikimédia/Wikipedia, April, the French association helping people with reduced mobility [ APF ], as well as influencing networks like French Tech and FrenchSouth.digital

In the near future, the association intends to develop workshop within retirement residences, because older people are an outstanding audience which understand perfectly the societal challenges of the free software.

Then, in partnership with the alternative communities around, the association is developing the Common Goods House, which will be a citizen third location for cross-pollination, and constitute a living space mesh where workers, association’s members, institutional partners, in short a place where citizens could meet up, exchange, share, re-appropriate and create all together, so that the “Logically Libre Software” (the association’s motto) would contribute to free the entire world.

Note from the translator :

Free software, freedom-respecting software, software libre, or libre software is computer software that gives users the freedom to run the software for any purpose as well as to study, change, and distribute the software and any adapted versions.