With a population of 7.5 million inhabitants and an area of 56,785 Km2, the Togolese republic is a Western Africa country which economy is based mainly on food crops and phosphate mines. Its true wealth is the wide variety of landscapes going from arid plains to green valleys, passing through great savannas in the north of the country, planted with great baobab trees.

This is the small but great country of Emmanuel Adebayor1, where Claude Féré and his spouse Marie Paule Oré settled to continue the service project which was initiated several years ago by a missionary aunt.

If you go in the Togolese savanna area, more precisely at Bombouaka, in the Tandjouaré prefecture, you cannot miss the Saint Louis Orione Center which is hosting children with disabilities. This center was set up some 40 years ago aiming at the disable children assistance. I is formed with several buildings dedicated to the administration, the patients reeducation, the teenagers home, the postoperative accommodation, the operating theater, the orthopedic workshop, the boarding school for young and severely disabled children, carpentry and welding apprenticeship workshops, the study hall, the computer room …

After their first visit to Togo, Marie Paule and Claude were extremely moved by the harsh reality this country is facing, ands also because one of the building displayed the name and the picture of her aunt. Since the destiny is changing like a chameleon skin, it seems natural that their feet brought them back here, where their hearts were already staying. 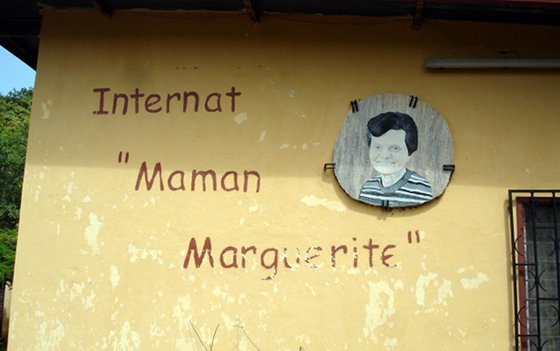 Building displaying the name and the picture of the aunt

Speaking of feet, most of the children hosted in the Saint Louis Orione Center don’t have any. They were never able to feel the direct contact and to merge with the land of their ancestors; they never went running on the palm-tree lined sand dunes, in the South, nor did they in the green valleys … However, never does not mean impossible.

In November 2011, Marie Paule Oré and Claude Féré created the YOVOTOGO2 association, with the goal of gathering lovers of Africa in general and of Togo in particular, in order to support the development of this center , but also all the health and educational structures in Togo. The association organizes also solidarity trips to support the various projects and discover this region which is definitely worth a look around.

Since years, the founders and the 19 members of YovoTogo, and a lot of donors and volunteers, contribute to : 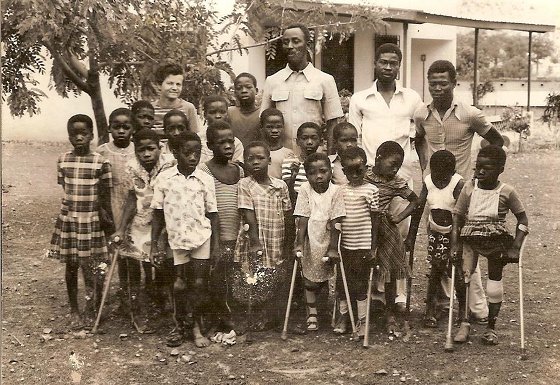 Picture of aunt Marguerite and few residents of the center 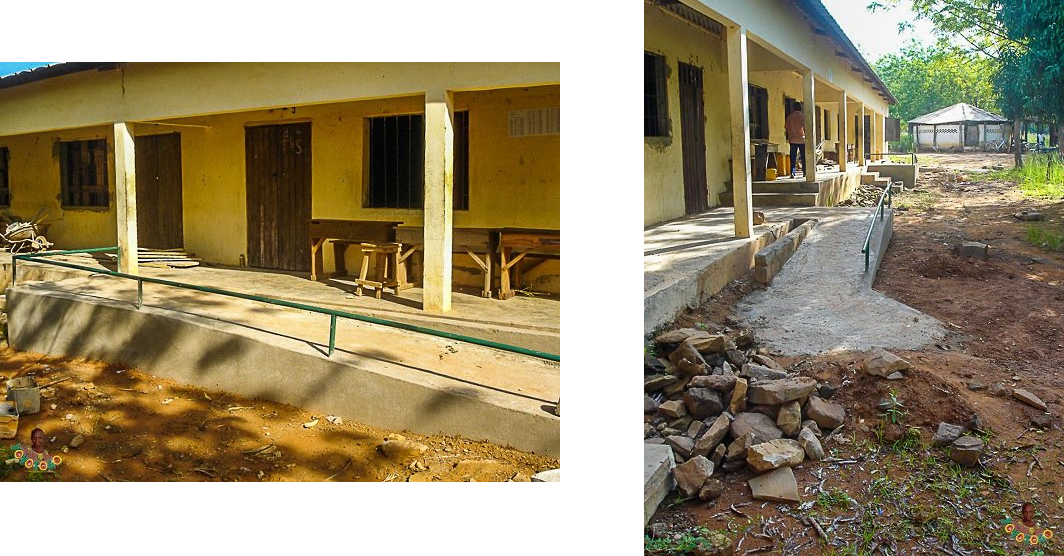 Materials for the orthopedic equipments workshop 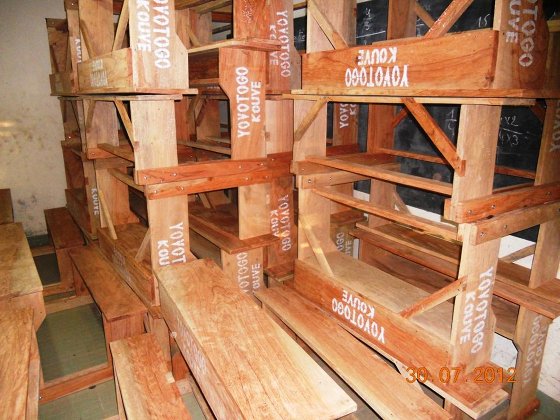 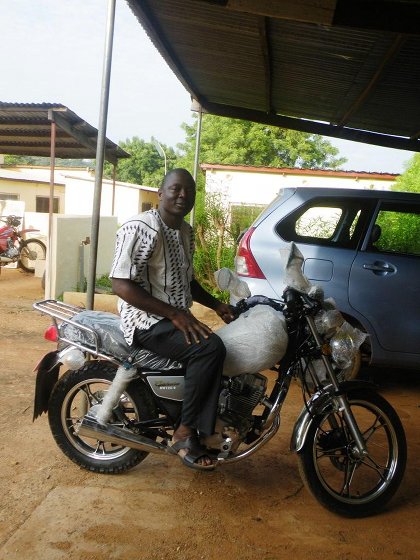 Like the little ant fighting its way to the top of the mountain despite all the obstacles, the YovoTogo association members, through perseverance and courage, managed to transform difficulties into opportunities and provided a bit of security and hope to these children, for whom life is a perpetual fight. Each year, the YovoTogo association provides 1500 pairs of used eyeglasses to OCDI – Caritas Togo3 in Dapaong, which allow this organization to have a large inventory at hand to improve at very low cost the eyesight of the worst off. 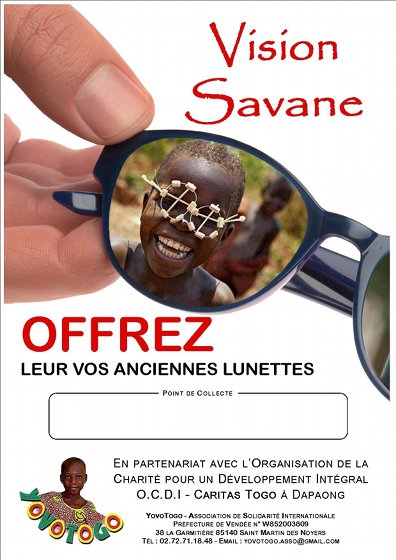 Some times ago, YovoTogo started to provide computer equipments for the Don Orione Center, which id managed today by the Father Alain Kini, who was born in Burkina Faso, the neighboring country. Therefore two computer rooms were created (and a third one in the Nano high school) with 46 computers and one photocopier. On top of this, the Nayéga computer room was set up by the Rotary-Club de Fleurus in Belgium and is managed by Yobé Koumbouni, member of the Tandjouaré Dapaong Rotary-Club, and general supervisor for equipments and education.

Today, this is one of the most important projects driven by the association, because it is highly important for the children to master the new technologies. This is why YovoTogo decided to run the computers with Emmabuntüs, a LINUX distribution easy to use and including several educational and entertaining programs, which will let the children improve their knowledge the world. Emmabuntüs was installed with the support of the FuturiMedia agency which took the responsibility to conduct the complete hardware review of these computers. 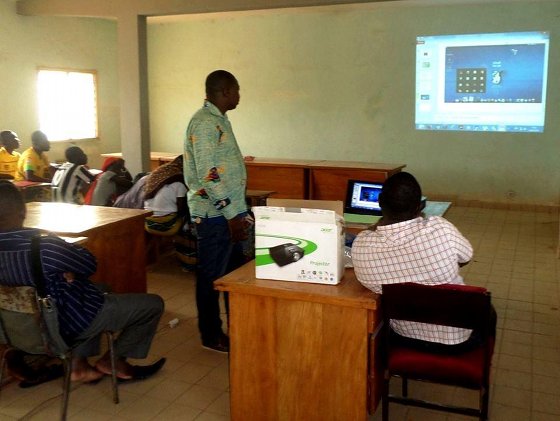 Presentation of the Emmabuntüs operating system 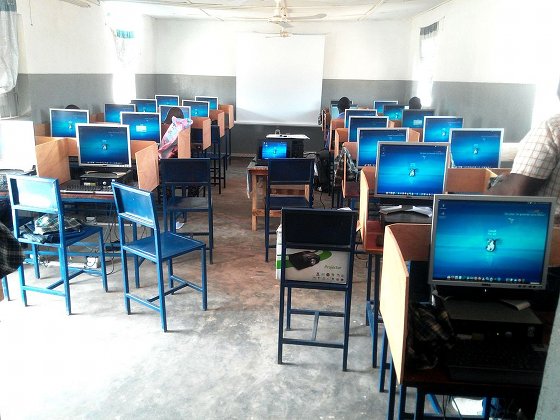 Computers installed with the Emmabuntüs distribution

These days, the goal of the YovoTogo association is to multiply partnerships in order to continue the installation of these four computer structures (and on top of which, the Tandjouaré, Bombouaka and Namoundjoga high schools will be added) with the Internet connection project, planned for year 2018, and using the RETICE concept developed by a French-Togolese engineer. Right now, a call was launched to collect 80 computers (which then will run the Emmabuntüs operating system) 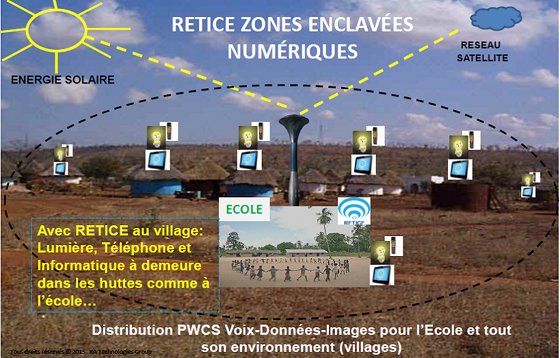 The Emmabuntüs collective and « The friends of Emmabuntüs » association, will provide at least 40 complete computers to set up more computer rooms in other high schools, in order to complete the electronic equipments of these high schools and the Don Orione Center. However, it is wise to specify a key step in the shipping process of these 40 computers : the stopover in the Emmaüs Paris Community.

Hélène, Jacquot, Jack, Patrick and Robert are the main actors for the computer reconditioning. It is in a premise provided by the Community that they were able to give a second life which were once declared obsolete. With the deep cooperation between Emmaüs, Emmabuntüs and YovoTogo, all will enjoy the fruits of the social and solidarity mutual assistance. 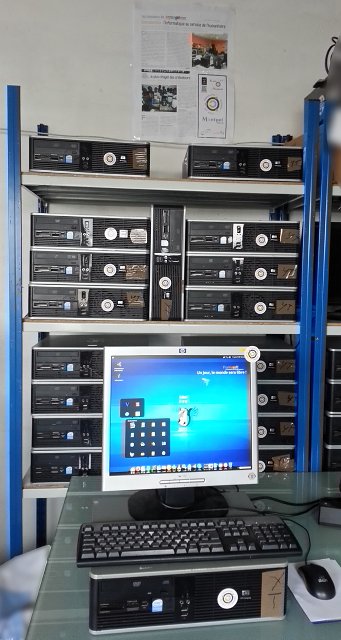 Computers refurbished for YovoTogo in the Emmaüs Paris Community workshop

1- Professional player who was key to qualify his national soccer team during the final phase of the 2006 world cup in Germany, by scoring 11 goals.

2-They are 42 different dialects in Togo. EWE is the majority language in which Yovo means “occidental”, “white” or simply “foreign to Africa”.

3- The Charitable Organization for Integral Development, works on the refurbishing and modification of eyeglasses in connection with the “Road of Light” office in the local hospital.