On November 3rd 2020, the Emmabuntüs Collective is happy to announce the release of the Emmabuntüs Debian Edition update 3 1.03 (32 and 64 bits) based on the Debian 10.6 Buster distribution featuring both Xfce and LXQt desktop environments.

This project was originally designed to facilitate the reconditioning of computers given to humanitarian organizations, and in particular, originally, to the Emmaüs communities (which is where the distribution’s name obviously comes from), and to promote the discovery of GNU/Linux by beginners, as well as to extend the lifespan of computer hardware and, as such, reduce the over-consumption of raw material.

This new update of our distribution provides an OEM installation mode, in the frame of our reuse campaign for all, that we launched beginning of September together with our Debian-Facile friends, Blabla Linux in Belgium and Tugaleres.com. You can look at the playlist of the videos (French speaking, with English subtitles) concerning the implementation of this method by Blabla Linux. 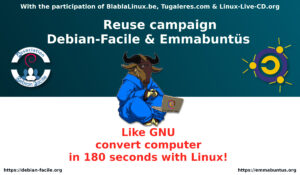 For this reuse campaign, our installation method is taken over in order to allow the refurbishing of a computer in less that 180 seconds. This is possible thanks to a USB key under MultiSystem and using Clonezilla augmented by our own script that uses clones of our GNU/Linux distribution and also those of our DFiso friends. You can look at the download page dedicated to this reuse method.

Following a remark made on the Debian-Facile forum for the reuse campaign, and concerning the handling of our clones by an OEM installation, we integrated this feature with the support of the Calamares scripts developed by Philip Müller (project lead developer for Manjaro distribution) for the Station-X project. Thanks to Philip, without whom we would not have been able to implement this feature. 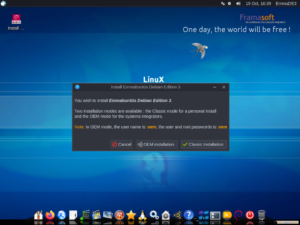 We took this opportunity to add the capability to clone the integrator environment as a reference for the end user, enabling an easy customization of the distribution to be applied later to the future computer user. 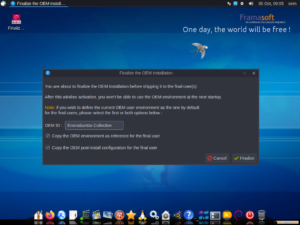 Following the release of this version, we are going to deliver our clones in OEM versions, to allow this installation by cloning method in the frame of install-parties. We also encourage all associations that want to work in the field of computer refurbishing to create their own clones, and our friend Blabla Linux made a video on this very subject. This feature will be also integrated in the Emmabuntüs DE 4 Alpha 2 next update, which will be available after the release of Debian 11 Alpha 3.

One video (French speaking, with English subtitles) realized by our friend Amaury aka Blabla Linux presents the most important new features of this Emmabuntüs DE3 release.

Concerning the 1.03 version, the following fixes and improvements were made:

As of November 3rd 2020, this version will be available on this page : download.emmabuntus.org