Hello Simon,
the Emmabuntüs collective has been very interested in your latest actions around Couëron (but where is Couëron?) and would like to get to know you better, if you want to?

I would be happy to talk with you about the actions we have carried out in Couëron. Couëron is a town of 20,000 inhabitants, located at 15km west of Nantes.

– What has been your personal journey to end up refurbishing old computers?

Since few years now I have been aware of the environmental issues (global warming, biodiversity, etc.). I have changed several of my habits to limit the impacts. But I wanted to act beyond my family circle. That’s why I trained and became a facilitator of “The Climate Fresk” association.

In addition, I work in the IT field (as developer) and I had read up on digital pollution and digital responsibility in order to identify my means of action at the professional level. I learned that most of the digital pollution was due to the manufacturing of the users’ terminals: all our computers, smartphones, connected TVs etc… So from a professional point of view, I had to be particularly careful to avoid introducing unintentional obsolescence.

During the first confinement, my partner, who could no longer carry out her professional activity, needed a computer. On my side I continued to work from home in telecommuting mode and could not pass on our equipment to her. In order to avoid buying a new computer, I started repairing an old laptop that had been sitting in a closet. After some basic hardware repairs, I looked for a lightweight Linux. And it’s in the lists of light Linux distributions that I discovered Emmabuntüs.

This is how the idea was born. I proposed to the Union of the cultural social centers of Couëron a project of computer reuse by and for the Couëronnais. The Union already had a collective of digital support bringing assistance to the inhabitants having difficulties using their material. My project was a complement to theirs, allowing those who were not yet equipped to receive a computer.
The project took off and several volunteers joined the project.

– What is your role in this collective?

The Union of Centers is in touch with the population and identifies people who need to be equipped. For example, there are families who only have a smartphone as their only point of connection to Internet. Children increasingly need to go online as part of their classes, especially from middle school on, and borrowing the parents’ equipment is not practical.

On the volunteer side we collect computers, and we recondition them under Linux. When this is done, the center’s animator organizes a meeting between the family and us so that we can hand the computer over them and explain how to use it.

We also participate in “Hackers Café” organized at the social-cultural center, which is the name we gave to our Repair Café. It is an event of co-repair of equipment with the inhabitants. They come with an object that no longer works (a bicycle, a toaster, a computer), and we repair it. For computers, it becomes an “Install Party” because the most appropriate repair on old computers is often to refurbish them under Linux. 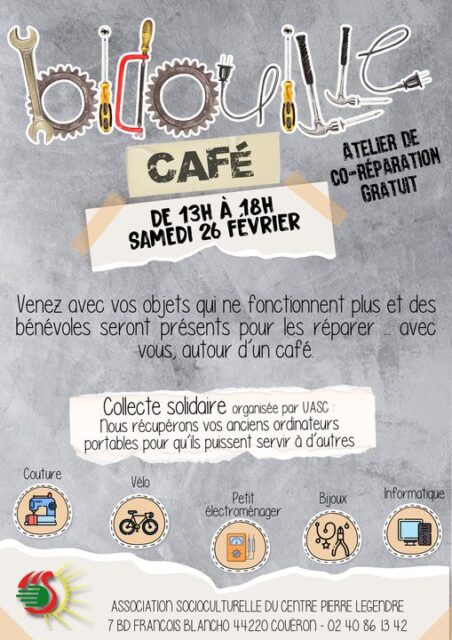 – Have you also refurbished computers for Africa?

Indeed, thanks to the network of volunteers of the Union of the cultural social centers of Couëron, we were put in contact with Jacques of the Matéri association which brings aid to Benin. We entrusted him with two laptops under Emmabuntüs which were then given to the secondary school of Matéri.

The picture speaks for itself: two computers that are no longer wanted in France are welcomed with great fanfare in Benin. Our respective daily lives are dramatically different.

I had not planned to ship computers to Africa when I launched this project, but the opportunity presented itself. It was an interesting meeting with Jacques who introduced me to their activities. I encourage you to have a look at their website.

In Couëron there are two cultural social centers, each offering a whole range of activities and services. The Union of the centers is an association allowing these centers to carry out common projects. Today there are three of them:

The digital support collective is a group of volunteers who use part of their free time to help people with digital challenges. An animator of the center receives phone calls from people who need help and she contacts us to know who is available.
There are different types of support: equipment that doesn’t work properly, need of explanation to use the computer, copy files etc… In general I offer my help when it concerns a hardware problem (need of advice to buy, repair or use an old computer). 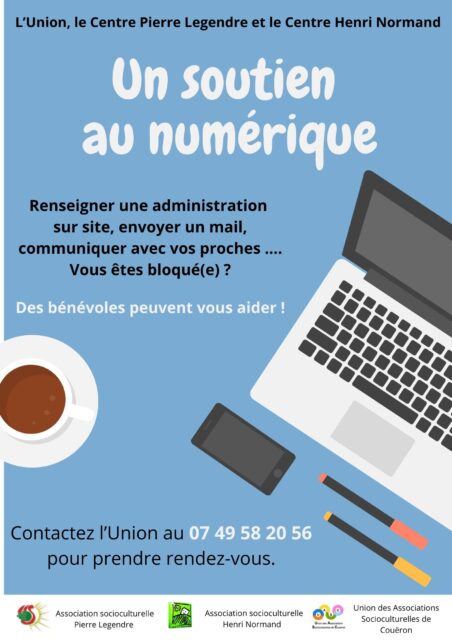 – When did you first get in touch with the Emmabuntüs collective?

The very first exchanges took place on the Emmabuntüs Internet forum when I was experiencing some difficulties in reconditioning computers or setting up the famous refurbishing key. Patrick was very reactive to help me. This confirmed to me that the Emmabuntüs distribution was a good solution, because it’s always reassuring to know that we can get help in case of issues.

The discussions continued when my project started to come to life, because I was taking pictures of the refurbished computers to talk about them on the internet and social networks. I think it’s important to document and tell the story of what you’re doing. I think it was a podcast by Arthur Keller on the “story telling” subject that motivated me to document and communicate about my actions. It inspires others to do the same, when you show that it’s not that difficult. And I also received help without even having asked for it.

– How long have you been into computers in general, and GNU/Linux in particular?

Computer science started to interest me during my high school tome, when I discovered Internet and the possibility to set up a website that could be seen by the whole world. I tried to program a website, I found it fascinating and I decided to make it my job.

As for Linux, I am not a big user. For years, I used to buy my computers under Windows, I only switched them to Linux when the performance became too limited. And I ended up buying a new Windows computer. It was mostly the economic aspect that motivated me, to save time before having to make a purchase.

But now, with a more environmentally conscious vision, I see all the potential of Linux, of the free software, the open hardware etc… They have a role to play in the ecological transition, by fighting against hardware and software obsolescence. I personally joined the association HOP! (Stop Planned Obsolescence) to support them financially.

– During your latest computer “hacking-cafe”, did you have the opportunity to use the famous magic refurbishing key developed by Emmabuntüs?

Of course ! Thanks to Amaury for all the videos he posts on YouTube [Editor’s note: and also on PeerTube 😉 ] about this key. These videos made me decide to choose Emmabuntüs, because I needed a distribution that can be installed quickly.

I mostly use the Free Culture version to get as much as possible on board. I sometimes add games and educational software when I know that children will use the computer. When the person doesn’t have Internet, which is rare now, I use Kiwix to add Wikipedia offline.

– How to face the contradiction between a strong political will to put online many administrative procedures and the low level of computer knowledge of the population in general, coupled with a deficient teaching of this very subject?

The digitization of administrative procedures seems to me necessary. Both because it is more comfortable for most of us, more efficient and can limit travel and therefore pollution and associated costs.

At the same time I realize that the people I have helped had real difficulties and do not know how to deal with certain things that seem obvious to me. We talk about “computer-illiterates“.

So what can we do? Here are some ideas:

– Do not close the physical administrative counters, we must be able to continue to do “as before” for all those who are not yet comfortable with the digital world;
– We must support, at least financially, the associations, collectives and volunteers who come to help the population. I think that projects working for digital inclusion do not receive enough support from the State or the local authorities;
– We must also support the reconditioning professional sectors because they allow the whole population to equip themself at a lower cost and with less impact on digital pollution;
– It is necessary to support the durability, as well as the repair of the equipment so that they are no longer a recurent financial burden, as can be a car that we have to bring too often to the garage. For this purpose, there is the “repair fund”, whose budget has been reduced;
– It is necessary that these formalities easily accessible on Internet. And I am not talking here only about people having a handicap, but the interface to the administrative sites should be very simple for everyone. There are still many sites that are too complex and where the user gets lost. We must take into account the expertise of “UX designers” (user experience designers) whose job it is precisely.

The State and the local authorities have a lot of room for improvement, but we, as citizens, can make a contribution by getting involved with an association or by joining the Reuse for All campaign.