In their infinite wisdom blessed with divine inspiration, the ancients were very right when saying that “union is strength” and that “you cannot wrap up a package with only one hand”. Since one year, these two sayings earned a place and enabled great accomplishments in the biggest urban commune of Abidjan, called Yopougon. This is where young and dynamic Ivorians, who fully understood the meaning and value of the team work, stepped forward to answer their nation’s call and the cry of distress of the youth, by saying “Ayiyikoh” ! (Let’s team together !) to develop their commune, their country, and to increase Africa’s influence across the world.

Ayiyikoh Business Incubator [Fr] aims to be a mutual assistance and solidarity platform for young entrepreneurs active in different fields, for developers in the new technologies, and also for unemployed people to stimulate their desires to work and display some potential interesting future. Their deep enterprising drive as well as the desire to share their knowledge, led the Incubator young users and the Ayiyikoh FabLab to start a common project in order, not only to give them a little economical stability to secure the FabLab survival, but above all to initiate children and adults to the computer tools and teach them all the opportunities available on Internet. A very laudable project which encompass the social, educational and even environmental fields, since the young people – having our planet at heart – decided to use recycled computer hardwares and an operating system based on Libre software to realize the project called Cyber Jerry [Fr] which started in October 10th 2015.

Thus, since several months and despite all the problems they face, like Internet difficult access, little space to work, lack of monitors for the Jerry, the young Ayiyikoh members manage their cyber room where the Jerry are all running under the GNU/Linux Emmabuntüs distribution. What else ? Since the Jerry were designed with recycled pieces of hardwares and Emmabuntüs was created with the goal of reconditioning old computers, and already includes several educational applications (remember : education is one of the fundamental reasons behind the Jerry project). “It was exactly what we were looking for” is resolutely telling us a young woman working on the project, suggesting some technical difficulties to install the distribution on such low performance hardware. The trick is to make the first install on a better performing equipment, and then move the hard disk inside the Jerry. Then, of course, you need to test the RAM modules, the hard drives and the CD reader/writer devices, because they are not always functioning. And the young Agathe to conclude by exhorting the entire world to use the Emmabuntüs distribution : “Emmabuntüs is a free system, designed to refurbish old computers. It runs well on different hardware architectures and configurations. It must be noted that Emmabuntüs as such has no limitation, is not sensitive to virus, but its major problem is that very few people know it’s existence” 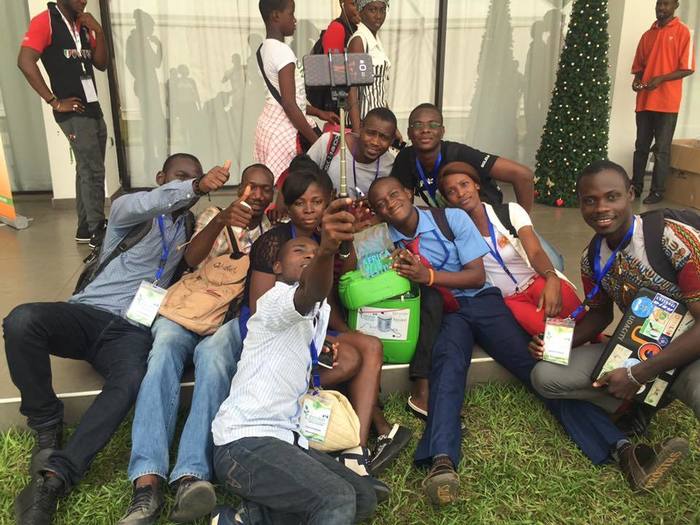 This project was not only carried out by young men, but also by young women ! Yes, women ! These days, what was always seen as a “boy thing”, is more and more popular with the female gender, and it is not Agathe, Bachabi et their other girlfriends who will disagree. These “infrared go”(1) participated to all to all the steps of the Jerry manufacturing, from cutting of the (Jerry)can, to sewing the collar, through assembling the components. By doing so, they were demonstrated that the girls from the Ivory Coast are not only good at wearing clothes “darling look at my back”, but were also able to do a lot more, and that they exhibit skills and talents they were willing to expose to the world. In addition they are so curious that they will take a ladder to climb to the Sky, if they thought that something strange was hidden up-there.

When they were asked about their sources of motivation, some, indeed, talked about passion, curiosity or expertize domain, but others like Agathe – went further by saying : “Personally, this is after watching the film character Jack Bauer (2) that I started to love computers. When I sow how easily Chloé manipulated software tools, I wanted to be like her, and thus, after my Bachelor’s degree, I decided to take the computer science classes”. It is also important to note that some of them were illiterate in electronic and computer science ! But since they understood that “if you go the well, you wont die of thirst”, since they noticed that this is the work experience, rather than an University diploma, which open doors for employment, since they were willing to participate to the life of their commune, they joined with their male counterparts, ignoring the social conventions which wanted to dedicate this activity to men only. Through their active participation to the Cyber Jerry setting-up, they contradicted Aya’s father (3) who was telling her : “long studies cost a lot, and are reserved for men. You will find a husband who will take care of you”. No way ! The woman, beyond her traditional role as food supplier for the Nation (67% of the women work in the agricultural sector, which is the fundamental basis of the Ivorian economy) (4), must be more involved in all the activity sectors for a better growth and a more active development (even the digital ones) because either at the familial or professional level, a man without a woman is like a portable phone without battery, like Abidjan without Ayiyikoh, like a Jerry without motherboard, or like Emmabuntüs without the Libre software … In short, the woman is the belt which holds the man’s trousers. 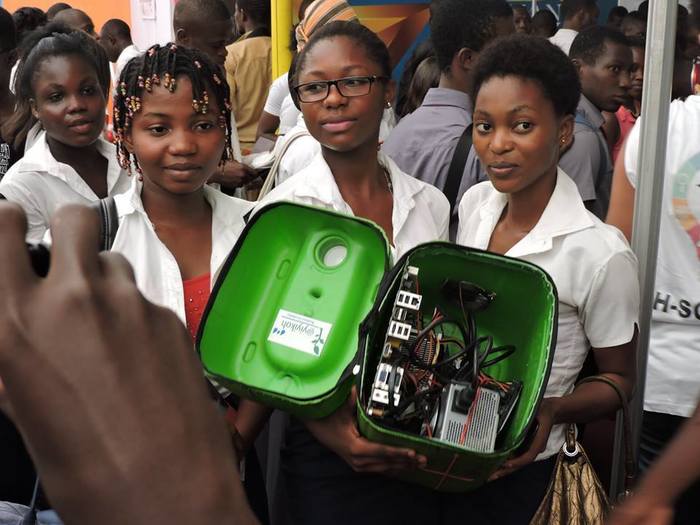