– Amaury, I had the pleasure of knowing you when I made the English subtitles of your video presenting Emmabuntüs DE-3, but now, I would like to know you better and deeper, if you agree.

Hello Yves. Yes this subtitled video. Good job, thanks to you again. This is where the saying “alone one go faster, together we go further”, makes perfect sense. 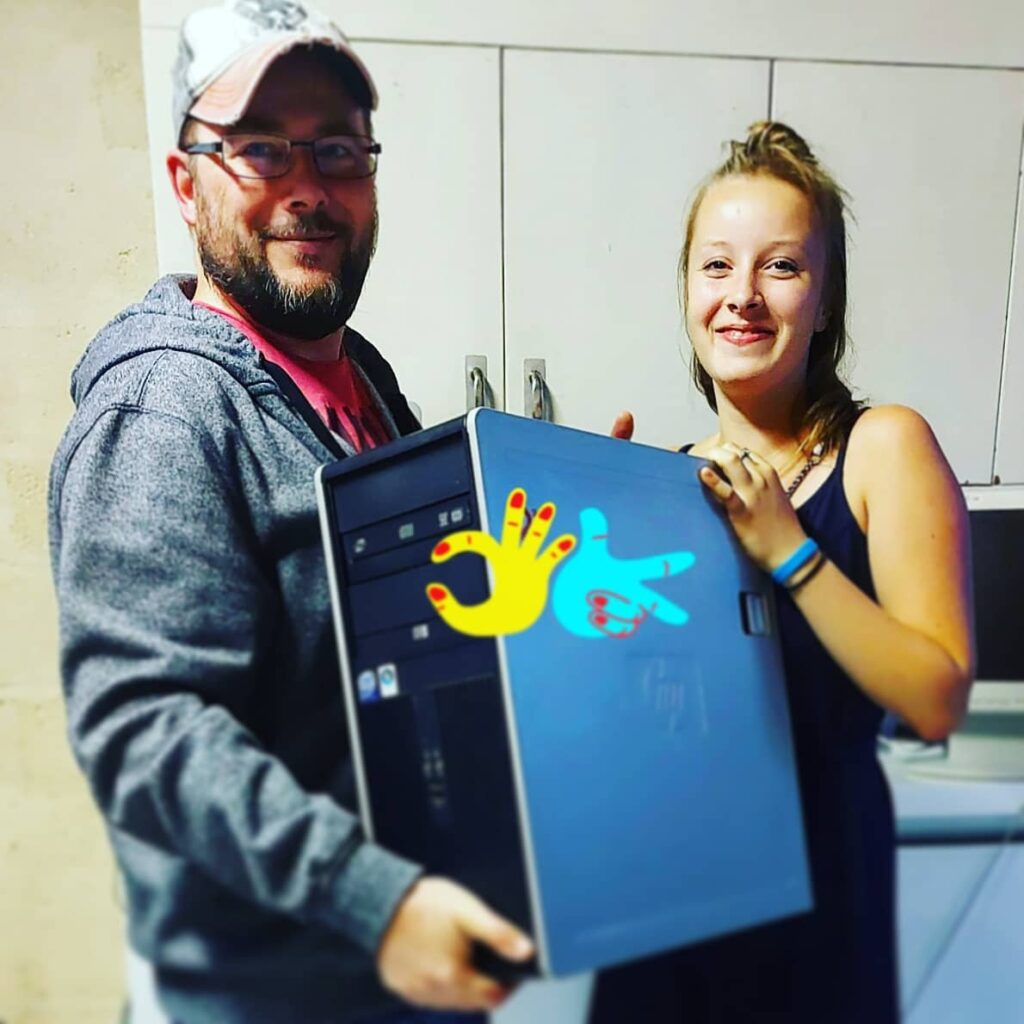 – Since when do you work with computers in general and with GNU/Linux in particular ?

The very first time I laid my eyes on a computer, I remember it as if it were yesterday, it was in third grade at the Wellin State School (in Belgium). I walked into a room hosting a dozen of machines, and I quite naturally sow a couple of Commodore 64 in front of me. I was 8 years old, it was in 1985. I was terrible in class, we were learning the Logo educational language. So that’s where it all started. And since then, I only see through computers.

My first computer, in my room at home, was a Amstrad CPC-464. You had to adjust the cassette deck with a screwdriver! I’m not kidding 😉

Ah Linux… Well, I also remember Linux as if it was yesterday. In the generalist computer magazines, sometimes a free alternative was mentioned with a very strange name : Ubuntu. I then tried to buy a magazine on this very subject. I can’t tell today which magazine I found, but I remember being surprised, amazed, but also lost by what I was discovering. A brand new world was opening up to me. And from then on, it all started with Linux, I hooked up, and still I never came down. Like in the Wellin State School with the Commodore 64. We sided for Linux in 2005-2006. I started with Ubuntu. Understandable, this distribution achieved then a small revolution inside the free system world, and it’s name was all over the places. Then the official derivatives and, quite naturally Debian, the mother of the Ubuntu distribution. I also played with a lot of distributions, but there is nothing to do, I started with a distribution based on Debian, and now I swear almost only by it.

Speaking of which, I am waiting for an answer on this slack 😉 Wait a minute… No, still nothing 🙁

Yes indeed, I am a user of the Linux Mint system, since quite a while now. It’s simple : when I make a video now, it is about this Mint system, or about Ubuntu or about our dear Emmabuntüs distribution, and basically nothing else. It was implemented by Clément Lefebvre (the “father” ofLinux Mint) to create a fast communication channel between the designers and the Mint team. And then obtain accurate information. A slack is a collaborative working space. At the beginning it was working great, but since sometimes, it is rather quiet. We shall see. And (in terms of communication) nobody can surpass our Patrick of Emmabuntüs. With him, no need for a slack, no matter the communication channel used, Patrick answers nearly always directly. Has always been like that and it’s just great !

– Do you want to tell us a little bit about how you make a living, next to your free software activites ?

I don’t like to talk about my private or professional life, not in great details, at least. Yet I expose myself publicly on social networks, but I show and answer to what I want. So I will briefly answer your question. I have my own business, I sell new or old refurbished computer equipment, I maintain and repair them. I give advices and bring my experience, and I teach courses as well. That’s it. If I had to characterize myself, I would say that 20-30 years ago repairmen existed for dish washers, TV set etc… This is analog to what I do today with computers. I do a lot of things that most people refuse to do any longer. 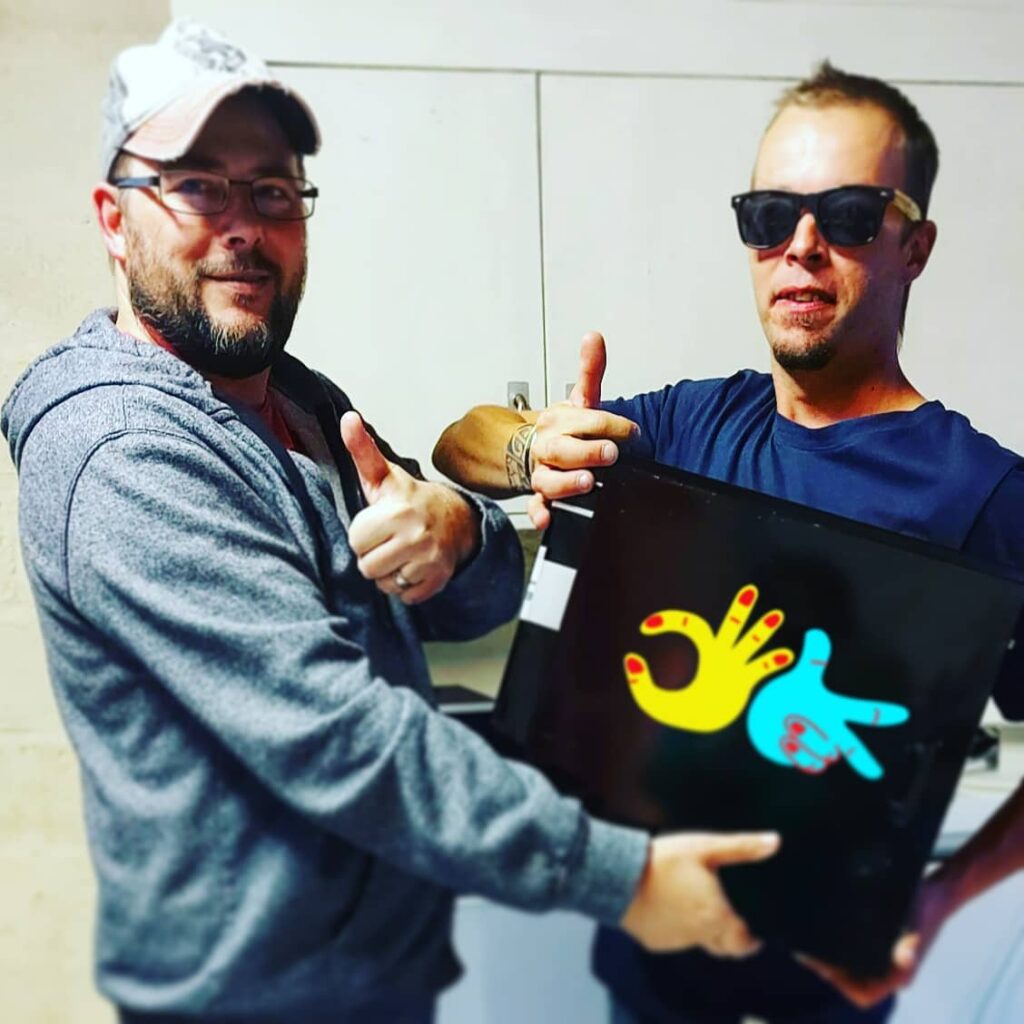 – How did you get in touch with Emmabuntüs collective ?

I think it was end of 2019 when I really started to talk to them, act and participate to their projects. I do remember that I said to Patrick : “I want to go further”. I was feeling a bit uncomfortable because I was following the Emmabuntüs system and its collective since a long time, but it was time for me, at my scale, to do more. I started by putting a message at the beginning of each video, stating that “Blabla Linux supports the Emmabuntüs collective”. I also started to modify the look, the graphical charter of Blabla Linux by integrating the Emmabuntüs logo. I also began to make videos on the Emmabuntüs system talking each times about its history ans its actions.

Then, one day, I received a message from Patrick. To summarize it : “Amaury, a Belgium company around Andenne just contacted me to donate some hardware equipment. Are you interested by it ?”. Yes, as easy as that 😉 I remember I said to Patrick that in order to answer to this company I created a email address like “emmabuntus-amaury@outlook.be “. Patrick had a good laugh and told me : “No, you cannot use Outlook ! That does not sound Free at all”, and he gave me an official Emmabuntüs address.

I immediately answered positively to this company in Andenne, went there and brought back the donated equipment at home. I took everything apart, checked everything, installed the Emmabuntüs system on them, and then proposed a donation in my area. These machines went to needy families. My priority are the community coffee shops, the schools , and then the families. I wanted to donate some machines to the schools in my little town, but they had just moved toward the tablet technology. We’ll talk about it, later 😉

– Where does come from this communication thirst that you seem to have carried within you for a long time?

It is true that that I’ve been active on social networks for a while now. Now under the Blabla Linux pseudo, before I was AnyComputer, and at the beginning simply under my own name.
it was the beginning of Facebook and YouTube was also booming, I watched a lot of people talking about their passions and I thought : why not me ? I could have talked about my job, but instead I explained my passion for the free. Even if some others are more passionate than myself 😉

– Are you a kind of rare specie in Belgium, or is there around you a powerful collective of geeks also fans of free software?

Listen, in Belgium I am surely not a rare specie, because I see that “days of the free software” , or othe projects are organized, but in the Brussels capital, or in the main cities like Liege etc. But in my area, which is around Rochefort/Ciney, in the province of Namur, and even in the neighboring province of Luxembourg, it is the complete vacuum. I feel lonely, I am a kind of UFO and I speak Chinese 😉

– So you just launched a campaign for the intelligent re-use of used computers. What was your path to get there ?

For me it was a very natural path. Since I was a kid, I’ve been dismantling, reassembling and repairing. Today I am doing it for a living. Not that easy but I am trying. In addition, I am a little gruff and boorish, don’t forget that I am from the Ardennes area (:)), but I have a big heart. So if I can make people happy with donations, while combining that with my passion, that’s great! And one of the best way to achieve this, is to be part of the Emmabuntüs collective. 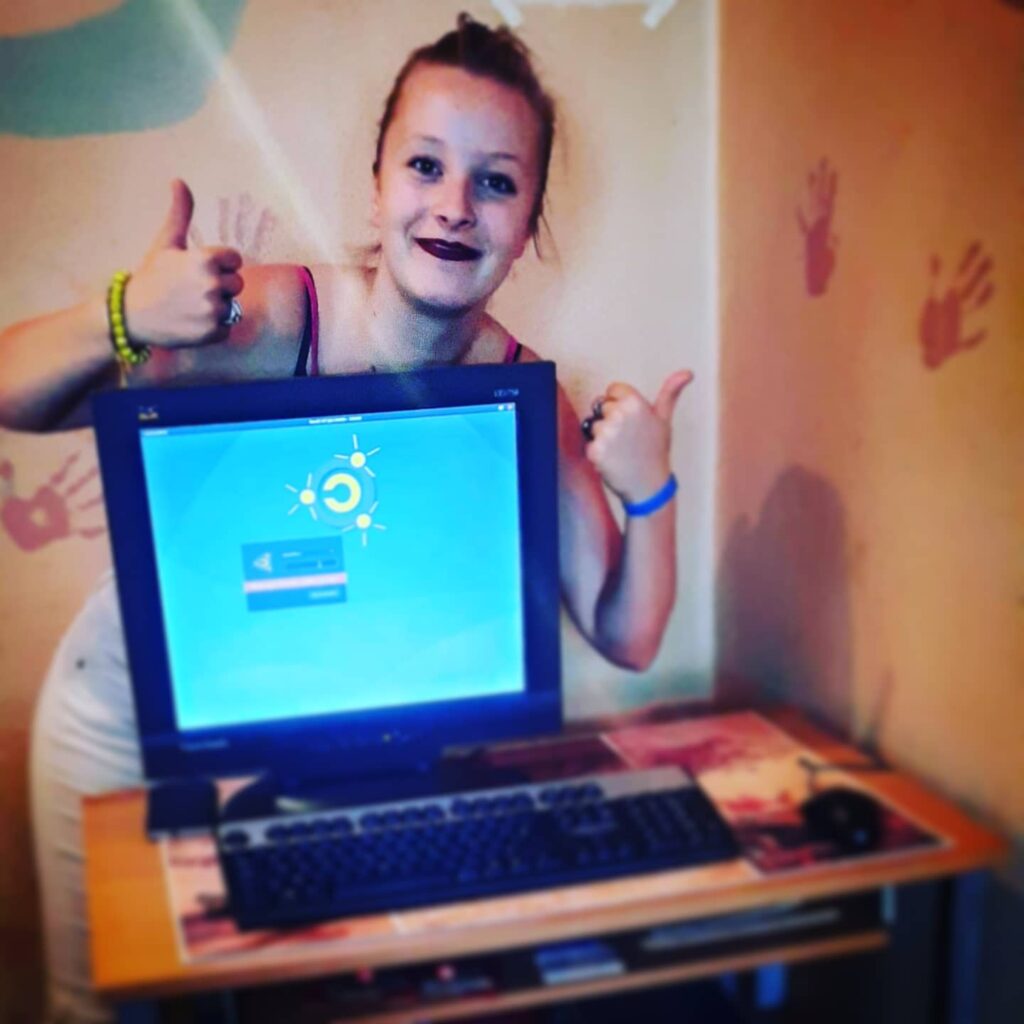 – And how many computers did you already refurbished and donate ?

Waouh, not an easy question 😉

So, for what concerns repairing/refurbishing computers, I did that since ever. First for myself, then for my relatives, then for my business, and now in the name of Emmabuntüs in Belgium 😉
I do remember, when I was 13, I think. My parents were independent and ran a butcher’s shop. Well, some clients came to ask my parents if was there, to take a look at their machine. My parents didn’t agree, they were afraid 😉 And little Amaury locked himself in his room and refurbished the machines 😉 Sometimes I got a bill 😉

If I had to really quantify this activity … Well, it is clear that I am not a collective but for a single person I believe it’s not that bad… Several hundreds I would say. With a quick calculation… Number of machines per year multiplied by total number of years, I would say more or less 500 machines, of which more than 50 running LinuxMint or Emmabuntüs.

Now, these days, under the label “Emmabuntüs in Belgium”, four machines and a fifth one is in the pipe. In fact, I have also created a publication calling for donations on the social networks. All donations are welcome. And now I hope that companies like the one in Andenne will respond to this call.

It is the very beginning for “Emmabuntüs in Belgium” adventure, so please be patient 😉

– How do you manage all these computer refurbishing, and how much of your time does it take?

How do I proceed ? But it is smart, clean and fast 😉 Here I am talking about the computer refurbishing for Emmabuntüs. Actually, the Emmabuntüs collective uses a dedicated USB key, specially conceived to execute mass refurbishing. I was not aware of it, previously. In fact I did hear about it, but I never used it myself. So I asked Patrick if he could show me how it worked.

So Patrick and myself freed some time and met through a videoconferencing system. Patrick then praised all the qualities of this key, and explained to me how to make one. A couple of programs, two scripts, a clone of Emmabuntüs and it’s all done 😉 Then Patrick told me : “you are going to do it again all by yourself, to see if this is OK”. To force myself to succeed in this little challenge, I first started by erasing the key that we had made together. So there I was left without a key 🙂 I was obliged to successfully complete the making of at least one key. Well within 20 minutes I had created two functional keys. And how long does it take to refurbish a computer with such a key ? 5 minutes 😉

I found that so great that I made a demo video of this method, as well as a playlist on how to make such a refurbishing key. Who wants to, can now make a refurbishing key under the free system GNU Linux Emmabuntüs. 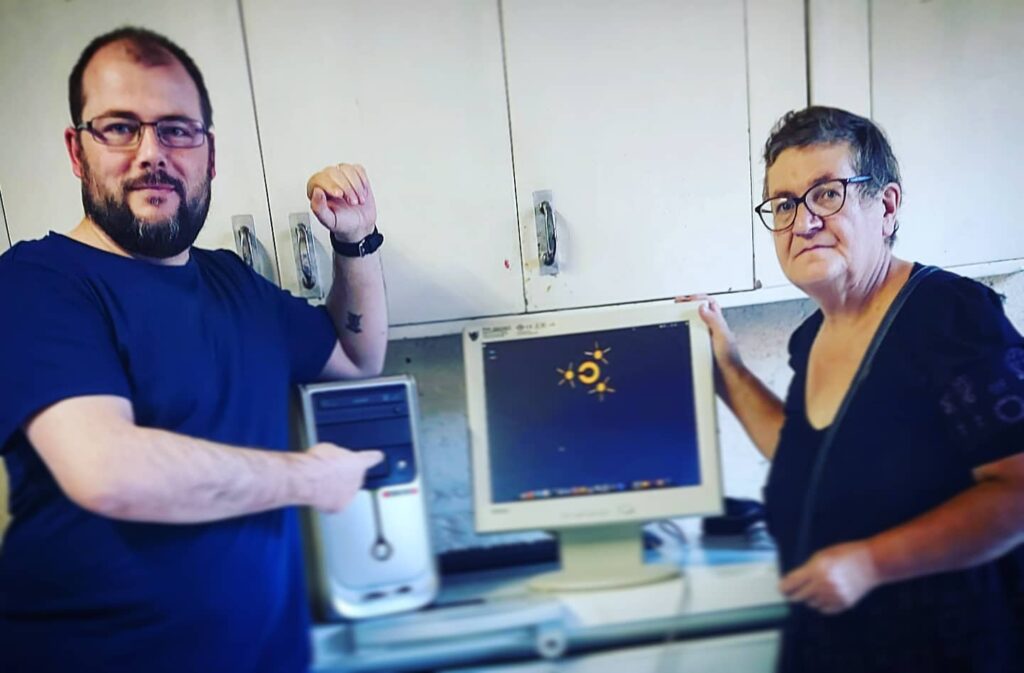 Many thanks Amaury for accepting this interview and for answering a few personal questions, although it may not be your usual cup of tea.

You can also find all the videos of our friend Amaury, concerning the refurbishing USB key, on the PeerTube channel of our Debian-Facile friends, hosted by Tedomum.net.

We want to thank the Belgium company Oscars for the donation of the first computers which were then given in Belgium by Amaury.

Obviously, the Emmabuntüs collective fully supports this nice initiative of our friend Amaury, and we now solicit the help of all Belgian Internet users to think about giving away their used computers less than 15 years old, so that this warm social and solidarity project could continue. Do not hesitate to contact us via our contact page.