Emmabuntüs, from help to digital autonomy

This summer, Cit’Light met with Patrick who is one of the co-founders of the Emmabuntüs collective, which collaborates with the Emmaüs communities. Thirteen years after the death of “l’Abbé Pierre”, their popular founder, how to define the support of the poorest in the digital age ? 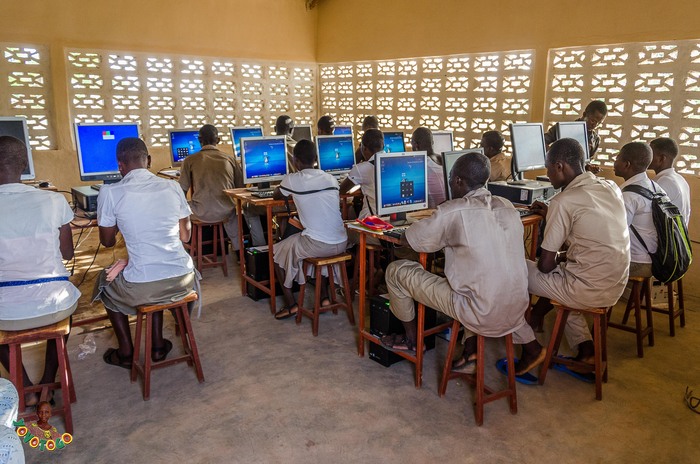 The computer class room of the Bombouaka college, in the savanna region of North Togo. [Source]

Could you please present the Emmabuntüs project, as well as its origin. In particular, what struck us was your involvement in Africa. Was it an initial goal of your project, or did it happen later on ?

The Emmabuntüs project started in 2010. I wanted to change my life, and I got close to the Emmaüs movement.

To put this in context, Emmaüs is a movement founded by “l’Abbé Pierre”, which reuses all kind of objects: books, lamps , etc. They also receive donations of computers they would like to refurbish, rather that sending them to the landfill. Without reconditioning, the hardware goes to the waste dump for a price of about 100 euros per metric ton. A refurbished computer has a lot more value (about 40 euros per computer in 2010).

First I wanted to help them by organizing information sessions, but it was not adapted to the Emmaüs communities internal logic, notably due to time slots issues. On the other end, in my city, they were looking for volunteers to help with the computer reconditioning. So I started refurbishing computers which where under Windows XP. In order to speed up the work (we were only two persons at that time), I also automated the refurbishing process to clean the machine and install a basis of free software (Firefox, OpenOffice) on top of Windows XP.

Even if it was somewhat automated, it took a fair amount of time (about 6 hours) to recondition a machine; At home, I was using Ubuntu for quite some time already, and I decided to start developing on top of this software base.

Ubuntu and Debian are both Linux distributions, free (as in free speech), gratis (as in free beer), and ‘open-source’, which can replace Windows or Mac OS on personal computers as well as on servers. By default, Ubuntu and Debian provide numerous free software: Firefox (web browser), LibreOffice (office suite), Thunderbird (e-mail client), and allow the installation of many other free or non-free (proprietary) software. The Linux kernel is the basic component on top of which distributions like Ubuntu or Debian are built up. Cit’Light covered the free software in the article “L’autonomie numérique à travers les logiciels libres“ [The digital autonomy through the free software].

Thus, instead of trying to keep the Windows license, to remove all the applications and reinstall new ones, we did put a straight new free system to replace Windows. The person in charge gave us the opportunity to install Ubuntu on four computers, to see if we would be able to resell them. The sales were as good as those with Windows, and that is how the full project started. I made presentations during some Ubuntu Party and I met with other persons who came to help with what became the Emmabuntüs collective, in March 2011. Following the proposal of Hervé Solanet, co-founder of Emmabuntüs, we decided to turn Emmabuntüs into a complete distribution, without the need to install Ubuntu beforehand. This enabled an installation without the need of an internet connection.

To come back to the project in Africa, it occurred in three steps: 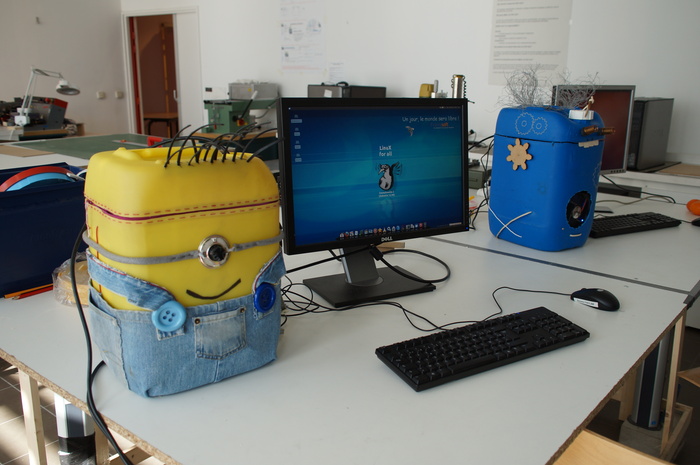 A computer made by the “Jerry Do It Together” project, re-using hardware components. [Source]

Is there anything equivalent in Belgium?

We work with Amaury Libert, who animates a website called Blabla Linux, and refurbishes computers as part of his job. A Belgium company contacted me to donate some machines to recondition. Thus, I asked Amaury if he could go get them, refurbish them and donate them to various associations. Actually, he made a video concerning this action, where he asks the audience if some persons are possibly interested by such machines.

The free movement is tied to the free of charge concept. As a result, how to make it a viable economic model? Is it obligatory to be helped by institutions or by the society in general to keep it free of charge?

Within our collective, everyone is a volunteer, and each of us has a job on the side. Our goal is not to develop a new economic model, but simply participate, with our passion, in helping others, and make nice encounters… In that sense, the financial sustainability is clearly not our first goal, and actually we donate – free of charge – a lot of computers.

However we thought about the sustainability of our project, since we tried, notably, to work with municipalities: to help them refurbish their machines, or donate to schools, for example. They would pay the employees trained to performed these tasks. As an example, the YovoTogo is self-sufficient in terms of supplies and installation. So, we try to make people self-sufficient by teaching them the know-how.

Cit’Light covered the economical aspect of the digital world in our paper: “L’économie de déservice : l’énorme impact écologique du numérique “ [The unservicing economy: the huge impact of the digital activity on our environment]. From your side, how do you envision the digital future at the environment level?

For the environment, it is very bad. I don’t know how long we can sustain this all digital world. What we do ourselves, is to participate to the effort at our very small scale, but it won’t prevent the ecological disaster. I am convinced: it’s not the 15 or 20 persons of our collective, nor the 500 computers sent to the Togo, that are going to change something concerning the ecology. But this will somewhat reduce the digital gap between us, and develop the analysis of the inhabitants: they won’t be surprised to see a computer. Thus, the training and the teaching provided to these persons are clearly going to change something.

At the environmental level, it reduces a bit the raw material extraction, but once again, it’s a drop in the ocean. In my opinion, the seriously bad point is that we are currently within a phase of digital growth. In this unbridled growth of digital demand, the biggest resource consumer is not visible: the web. It is internet, the video. But the worst in terms of environment is the portable phone which remains a big issue.

How could this be regulated or changed in a deeper way?

We need to either stop, or impose quotas. These people are on a growth model: they make a living with it. The more advertising they can broadcast, the more money they earn. In order for people to see more ads, they need to be more and more connected. We are facing a vicious circle. In a way, the snake bites its own tail…

Some Internet users criticize us because we use old computers and increase their lifespan, instead of using modern hardware. The idea is that recent computers consume less power than older ones: having a fleet of old computers would therefore have a high ecological impact. We had a close look at price and consumption of these computers, compared to a modern equivalent: the Raspberry Pi. This is a small computer that fits in your hand and consume around 10 Watts whereas our refurbished machines consume 300 Watts. If we were to decide to use these Raspberry Pi and ship them in Africa, we need to look at two aspects of the problem. First, we need to adapt Emmabuntüs to this type of hardware, which is estimated at about one year of work, and is therefore not negligible. Second, the price: where we retrieve our computers, the Raspberry Pi are not available on the second hand market, and we need to by brand new ones at the unit price of 50€ (with power adapter and SD card)!

So the choice is between either operate like we do right now, that is retrieve free old computers, that we need to transport in large boxes, or buy Raspberry Pi that you can pack within a suitcase, but cost 50€ each. After a small computation, the amount of money needed to buy Raspberry Pi computers, is equivalent to the shipping of 3 containers: we would need 6000€. So in terms of economical model, it does not work. In terms of energy model, the jury is still out: do the refurbished computers consume the equivalent of 6000€ of electricity?

What do you think of companies like Microsoft that are starting to promote free software?

Linux did not happen by itself. IBM and Dell financed the Linux kernel development to kill Microsoft.
For a long time, Microsoft wanted to fight against that. They lost, and now they are siding with the others. But they are going to utilize the free software like other company utilize the volunteering. This is green-washing with free software: they pretend to help developers. And before they shouted that free software was like cancer. They are forced to surf the wave, because banging on the free software make them look like the bad guys.

One last question: what are the latest news concerning Emmabuntüs?

In term of news, what we accomplished “because” the COVID-19, is the release of our 4th version based on Debian, 9 months ahead of schedule, and financed by my company, since I was partially unemployed. We conducted a major redesign of our websites in February, thanks to WebAssoc, which helps other association to build their websites.

In terms of events we participate to the Festival of Humanity the second week-end of Septembre, which gathers between 300 and 500 thousand persons. We put the free software back at the Fête de l’Huma with our friends Yann Le Pollotec and “ Les ordis Libres” [The free PC’s] association. But this event is canceled this year, so no event foreseen for the time being.

In terms of collaboration, our friend Amaury Libert wishes to develop our implementation in Belgium to refurbish aged computers, and then, donate them to associations, schools or persons in need. We take advantage of this interview to make a first call for computers donations in Belgium, as well as a call for needs concerning computers under Emmabuntüs Debian Edition, watch the video with the first 4 donations. In September we will start a big country-wise collaboration in terms of computer reuse with our friends of the Debian-Facile association and its new leading team. So a very busy back to work is waiting for us!

If you own old computers, remember to contact Amaury Libert who is currently looking for them in the frame of his recovery campaign ! For more information, watch his video calling for donation.

This article was originally written by Cit’Light on September 20, 2020.
Many thanks to Cit’Light for giving us the authorization to traslate this paper in English.