Friday May 25th 2012, has been a very special day for the Free Software community in the Ivory Coast country. The Yamoussoukro town, commonly called Yakro by the Ivorians, experienced a significant event in the whole coworking history. “The sharing night” gathering, as the coworkers decided to name it, was hosted in the City Hall of Yamoussoukro, which is the political and administrative capital of this country. One could see, all night long and under the high authority of Wilfried N‘Guessan, the master of ceremonies, busy coworkers sharing ideas and putting all their efforts together to finalize their projects. And this is precisely at the end of this famous “sharing night” that was born the very first Jerry built in Africa. And at the same time, the JerryClan Ivory Coast community was also born, with the pulse of Florent Youzan, Jean-Pierre Koutouan, Cyriac Gbogou, and the Afriworkers network. 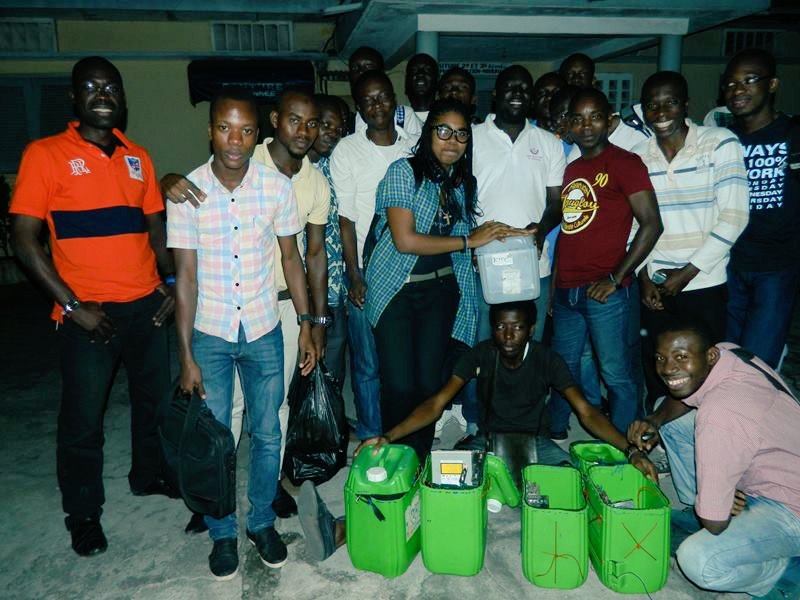 The Jerry Do-It-Together, also called Jerry-Computer or Jerry-Can or even plastic-tank (name it the way you want), is a Personal Computer built with recycled electronic components, installed inside a 20 liters (about 5 US Gallons) plastic can, and running under a free1 operating system. This innovation was made by Laure Guillou, Xavier Auffret and Chemsedine Herriche, three students whose very first Jerry designed at the ENSCI-Les Ateliers school, won the 2011 Humanitech challeng, a humanitarian invention contest for students.

The Jerry is freely customizable. It is suitable for all kind of purposes, and can be used as desktop or house computer or as a server to host applications and projects within a client/server environment.

Beside the fact that the Jerry is built by using recycled computer hardware, thereby directly contributing to the fight against environmental pollution, it is important to note that it works mainly with free software. 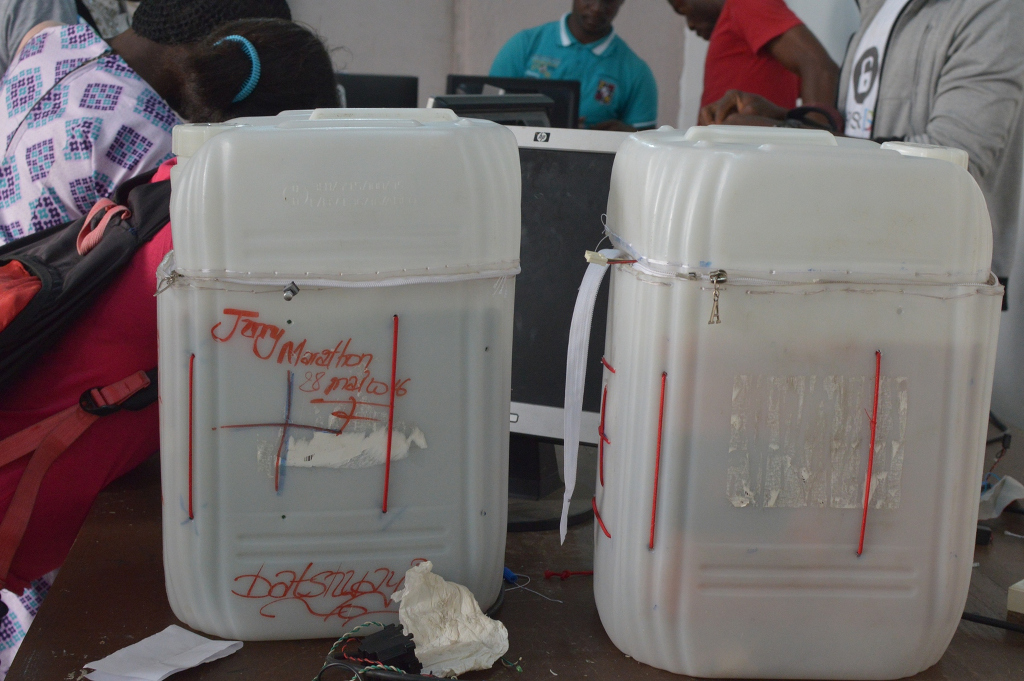 Building Jerrys in the BabyLab of the Abobo neighborhood of Abidjan, in year 2016

So, the JerryClan Ivory Coast community is this gathering of people passionate about free software and open hardware who wanted to share with the entire world the ingenious innovation represented by the Jerry.

The main targets of this JerryClan are young entrepreneurs, students, and local institutions. As far as the objectives are concerned, they want to : fight against the digital divide, make available low cost information systems, propose new perspectives for hands-on training, facilitate knowledge sharing, fight against the global warming, and be part of the development through the recycling process, by giving a second life to the electronic waste.

Jerrys helpfulness is not only reflected by the fight against pollution, but also by the sharing of ideas and the merging of cultures which, for example, encouraged the collaboration between JerryClan France and JerryClan Ivory Coast in order to set up workshops to popularize the usage of Jerrys, as well as to train people on the different steps of its assembly.

Building a Jerry is rather simple and even the most inexperienced persons can find a role in the different steps of its construction. They range from the basic products recovery (can, motherboard, disk drive, power supply, nail, elastic string, zip, cutter, …) to the Install-Partyphase (during which the free operating system is installed on the completely assembled hardware), going through cutting the can into three parts (head, body and collar), identifying the components mounting points, sewing the zip on the can head together with the body reinforced by the collar, as well as fixing the actual components. 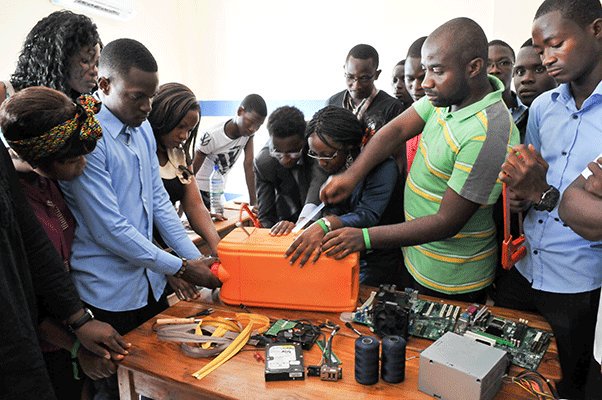 Building of a Jerry by JerryClan Ivory Coast during the 6th Innov’Africa forum in Lomé, Togo.

Emmabuntüs is the most popular operating system within the JerryClan Ivory Coast community, because of its completeness, since it includes a complete Office suite, an Educational suite, a multimedia package, and plenty of other applications available for the end users. The Emmabuntüs distribution has always been used to run these Jerrys because when downloaded once, it is extremely easy to roll it out and to make it used by people with a weak Internet connexion, or even no connection at all.

Despite the numerous issues (finance, equipment, real estate) the JerryClan Ivory Coast members are facing, they were able to complete several projects which, furthermore, received some recognitions at the national and even international levels. Among others :

And it is worth noting that all these projects are running inside a Jerry. 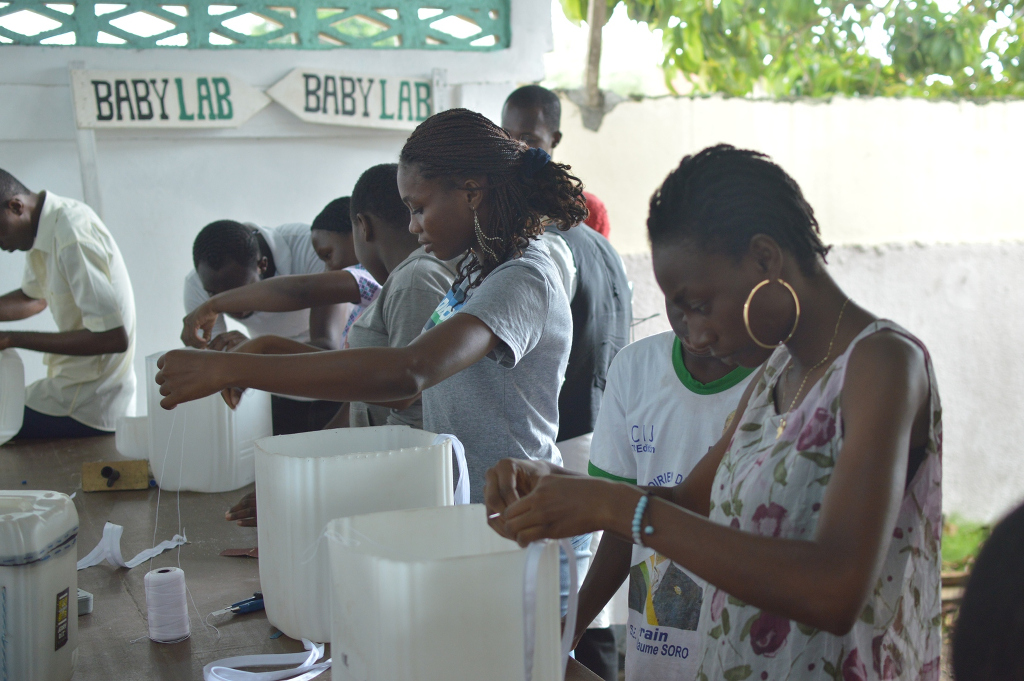 Building Jerrys at the BabyLab in the Abobo neighborhood of Abidjan, in 2016

While it continues its work, side by side with other local organizations promoting the “Do-It-Youself” method and the free software, like the Ayiyikoh FabLab or the BabyLab, the JerryClan Ivory Coast community intends to install a Jerry in a computer corner within each classroom of a kindergarten, in order to help children at a very early age to face the digital challenges. This project, obviously, can only be achieved through the active support of all those who, since day one, participated to the innovative development of the Jerry. Therefore, the adventure is open for all, in the city of Abidjan, Area 4, Marcory community, where is located the Ovillage head office, hosting the JerryClan Ivory Coast community.

1Free as in free speech.