On today’s agenda, we plan to visit three out of the seven training rooms which have been implemented until last year. We start with the one in the Bombouaka high school, then those of Tandjouaré and finally those of Nano. Generally the attendance rate as well as the equipment follow up are satisfactory. New USB keys containing the new version of the Operating System will be given to the JUMP Lab’Orione members in charge of the maintenance and sustainability of the project.

During the following days, we will inaugurate six new training rooms, bringing to 13 the total number of installed rooms. Around noon we go at the house of Rotary Club members Arsène and Martine, to share an excellent lunch, and some fresh drinks well-deserved under this hot temperature. Afternoon we are invited by the Tandjouaré-Dapaong RC to the delivery ceremony of the solar panel installation within the Tampialim high school, near the Ghana boarder. It is a GD project of the Quebec RC. Spectacular welcome by a traditional folk group featuring around 80 women all dressed in white. 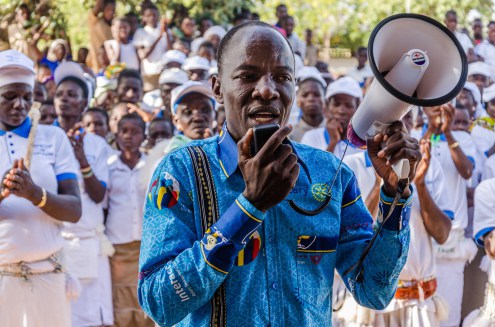 There is one dance after another, following the rhythm of the drums, while the bells and whistles pierce us deeply. All the children attend the ceremony, where a lot of people have a say, from the traditional village and districtrulers, to the local officials, and to the school director. Thanks to the solar panels, the sun set will no longer systematically spell the end of class. Marie-Paule and Patrick are given traditional dresses they even wear during our return trip which takes place later than expected and subsequently we experiment the night driving condition on the trails. Each of our day is each more beautiful than the last. 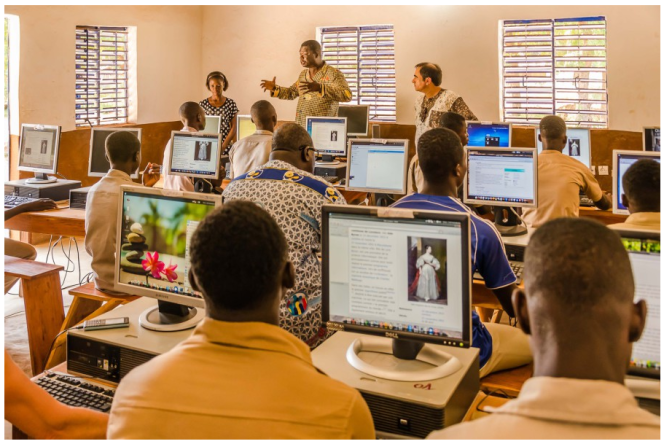 This morning, Patrick runs the first computer training session aiming at the hardware refurbishing and at his Operating System configuration. The pillar members of the JUMP Lab’Orione organization are attending this event, and they are going to remain alert the whole day, while writing, video-taping or audio-recording all the information. The action plan consist in building a kernel of trainers who, in turns, will transfer their knowledge to the other organization members. Marie-Paule and Claude go to the boarding house of the Mô Fant high school where they take care of two of our sponsored young girls, Emilie and Marie-Jo.

Marie-Paule will stroll around the market with them and make some shopping to improve their ordinary living conditions. Like every year we notice that their requests are not aimed at entertainment, but they rather select hygiene items, containers, fabric for dresses, underwear, batteries, sheets of paper, pencils etc. etc. For having followed these children since 7 years now, we can emphasize their early maturity without losing their child heart. We lunch all together before splitting again for the afternoon.

Eric Fabre, the president of the France-Togo association tells us that he is on his way from Lomé to Dapaong in order to meet with us and look at our actions. We meet up in the residence “Vire dans l’Espérance” (Living in Hope) where we will spend the night; The Marie-Stella sister, who is the founder manager of this structure, including the orphanage for children of AIDS, is coming our way, and after having escorted Emilie and Marie-Jo back to the boarding house, we discuss together until almost midnight. 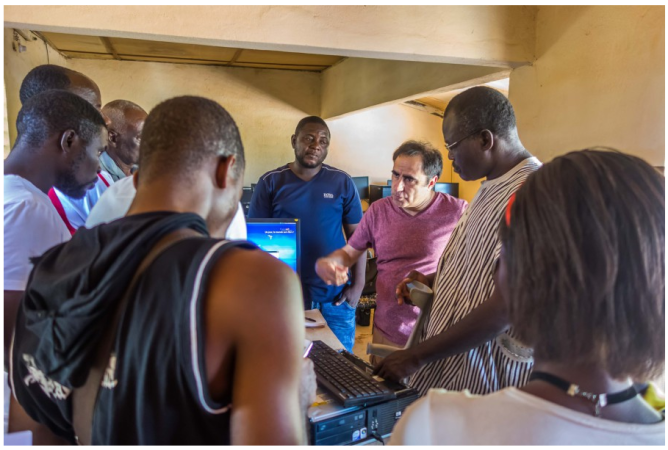 Early this morning, Myriam, a volunteer friend of Gabrielle (who works on writing a book on the Don Orione Center), informs us that one of her friends is very interested by our computer project and would like to meet with us before he leaves for the Burkina Faso. He is actually a member of the Rotary Cvlub in the Lyon area, who is also responsible of the association “Terre des Hommes” (Earth of Humans). He helped the building of a school, called by the same name as the association, including a computer room. Since he is facing maintenance and sustainability issues, we provide him with information about the Emmabuntüs Operating System, including educational software, a Wikipedia reachable without Internet connection as well as the local support he could get from our JUMP Lab’Orione local hub. The school director and Yves, his son, are quickly convinced by this solution, and thus we will leave the Togo with the assurance to see the 14th training room populated by 16 computers coming from the “Earth of Humans” association.

Next, we visit the orphanage managed by Sister Marie-Stella and Mama Tita, before we hit again the road for Dapaong where we are expected at 1 PM by the members of the Women Leaders of Tandjouaré to meet up with Marie-Paule who support them, thanks to the participation of women in French Vendée, mainly spouses of La Roche sur Yon Rotary Club members. We give them a parcel of grains as a gift offered by a donor. This year, Marie-Paule broadcast a song fitting well with the context, “Women are the Light of the World”, from Frédérique François, and our friend Arsène will work hard to translate it in Moba verse after verse. We end the day at the table of Wankas, member of the RC of Tandjouaré Dapaong. 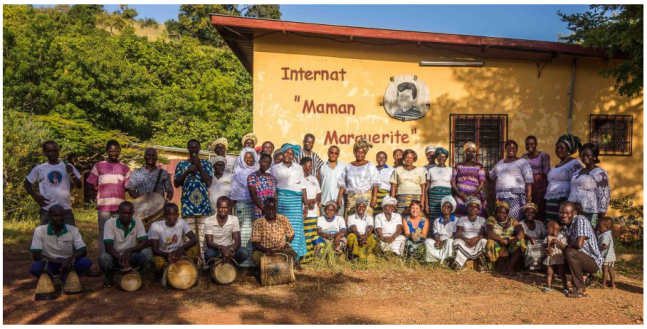 The original French post of this article can be found here , courtesy of our friend Ordinosor, which was itself written after the diary of the 2017 solidarity journey of our YovoTogo friends friends : https://www.yovotogo.fr/nos-voyages-solidaires/2017/