On March 20, 2017, the Emmabuntüs Collective is happy to announce the release of the new Emmabuntüs Debian Edition 1.02 (32 and 64 bits), based on Debian 8.7 distribution and featuring the XFCE desktop environment.

This distribution was originally designed to facilitate the reconditioning of computers donated to humanitarian organizations, starting with the Emmaüs communities (which is where the distribution’s name obviously comes from), to promote the discovery of GNU/Linux by beginners, as well as to extend the lifespan of computer hardware in order to reduce the waste induced by the overconsumption of raw materials.

This update is released to ease even more the refurbishing workload on all the associations using Emmabuntüs, and on our JerryClan friends in France and Africa who practice intensively the recycling of computer components while they are building their Jerry Do It Together. They are located in Ivory Coast, Togo, Cameroon, in the Ayiyikoh or DouaLablaboratories, and all use Jerrys under Emmabuntüs to develop innovative projects in their respective territories. This new version should also further help those who are running training classes and particularly in Africa : YovoTogo, JUMP Lab’Orione, and RAP2S. If you want more details concerning our various cooperations with these associations, please read this interview which summarizes the 5 years of our collective existence.

This new version support our efforts even more efficiently, thanks to this three improvement axis :

Starting immediately and by default, Emmabuntüs uses Lilo, the alternative search engine on the web.

This decision was taken for two good reasons : the actions taken by the engine to respect the privacy of the web users, and the possibility to redistribute to different associations the incomes generated by the advertising.

The money earned by Emmabuntüs is totally and directly redistributed to our partners YovoTogo, JUMP Lab’Orione and Montpel’libre and will allow them to finance social and environmental projects.

As of today this list is small, but we hope to be soon in position to extend it to other partners, thanks to your growing support on the Lilo platform. 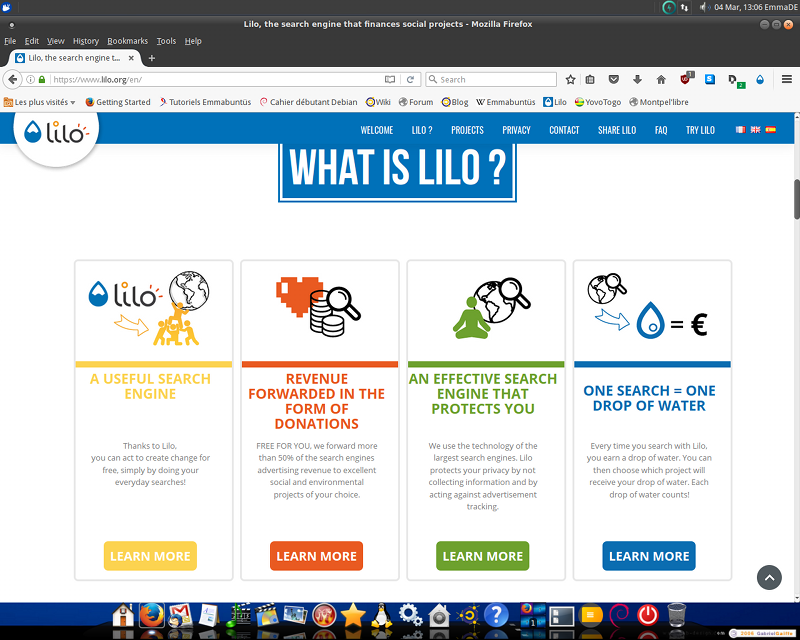 Another new feature is the capability to install Emmabuntüs on recent 64bits computer using the UEFI mode. Thus we increase the hardware compatibility with modern computers, which will enable their easy refurbishing and expand their lifespan.

On the documentation front, this release includes “The beginner’s handbook”, an essential reading produced by the 3HG Team fellows conducted by our friend arpinux ;). Our collective did contribute to its English version, and we hope to be able to contribute further to the development of this outstanding tool. Also part of this release are the latest updated presentations and tutorials which are also available on the Developpez.com web site, as well as some data belonging to the free culture (various off-line encyclopedias).