On August 28, 2017, the Emmabuntüs Collective is happy to announce the release of the new Emmabuntüs Debian Edition 1.03 (32 and 64 bits), based on Debian 8.9 distribution and featuring the XFCEdesktop environment.

This distribution was originally designed to facilitate the reconditioning of computers donated to humanitarian organizations, starting with the Emmaüs communities (which is where the distribution’s name obviously comes from), to promote the discovery of GNU/Linux by beginners, as well as to extend the lifespan of computer hardware in order to reduce the waste induced by the overconsumption of raw materials.
This update is released to ease even more the refurbishing workload on all the associations using Emmabuntüs, and on our JerryClan friends in France and Africa who practice intensively the recycling of computer components while they are building their Jerry Do It Together. They are located in Ivory Coast, Togo, Benin, Cameroon, in the Ayiyikoh, BloLab or DouaLab laboratories, and all use Jerrys under Emmabuntüs to develop innovative projects in their respective territories. This new version should also further help those who are running training classes and particularly in Africa : YovoTogo, JUMP Lab’Orione, and RAP2S.

If you want more details concerning our various cooperations with these associations, please read this interview which summarizes the 5 years of our collective existence. 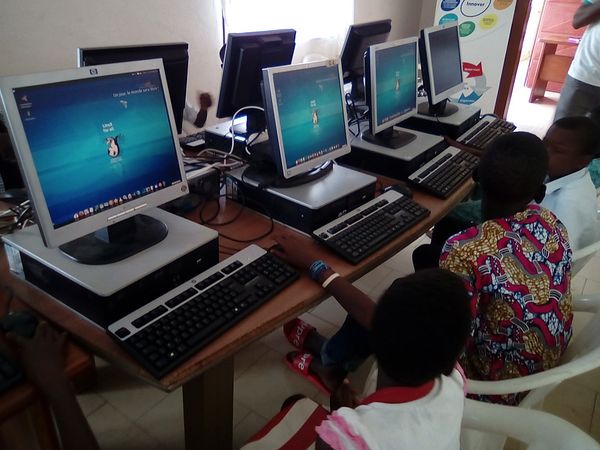 Computers under Emmabuntüs used by the BloLab in Benin,
during the children training workshops on the Scratch software

This version does not introduce big novelties, like did the 1.02 version with the UEFI support and the addition of the Lilo search engine by default, but rather some significant improvements, and even more free software with the Framasoft embedded services.

This version will be the baseline of our next version, Emmabuntüs Debian Edition 2 based on Debian 9 Stretch, that we plan to release sometimes in September 2017.