On June 15th 2020, the Emmabuntüs Collective is happy to announce the release of the update Emmabuntüs Debian Edition 3 1.02 (32 and 64 bits), based on the Debian 10.4 Buster distribution and featuring the XFCE/LXQt desktop environment.

This distribution was originally designed to facilitate the reconditioning of computers donated to humanitarian organizations, starting with the Emmaüs communities (which is where the distribution’s name obviously comes from), to promote the discovery of GNU/Linux by beginners, as well as to extend the lifespan of computer hardware, thereby reducing the waste induced by the over-consumption of raw materials.

This new update of our distribution mimics the improvements implemented in the recent Emmabutüs DE4 version, that is the additions of : 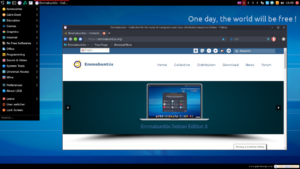 On top of these changes already included in the Emmabuntüs DE 4 version, we added the VeraCrypt utility, allowing you to secure your personal data within an encrypted and portable container, as well as GtkHash to ease the checksum controls of your files and the ISO ones. We also added RadioTray-NG and Vokoscreen to replace their obsolete equivalents (RadioTray and Kazam). These enhancements will in turns be ported to the next update of Emmabuntüs DE 4 Alpha 2, which will be released when the Debian 11 Alpha 3 is available on-line.

The whole set of our scripts has been improved and completed to simultaneously support both XFCE and LXQt desktop environments.

The video made by our friend arpinux presents the most important new features embedded within this new EmmaDE4, as well as the eternal essentials of the Emmabuntüs distribution. This video is very well suited to present also the new features of this Emmabuntüs DE 3 1.02 version.

As of June 15th 2020, this version can be downloaded by visiting this page :
download.emmabuntus.org.