On July 18th, 2022, the Emmabuntüs Collective is happy to announce its Emmabuntüs Debian Edition 5 Alpha 0 (32 and 64 bits) new release, based on Debian 12 Bookworm currently in development and supporting both Xfce and LXQt desktop environments. Our new version is released in Alpha 0 since the Debian 12 version is not yet available in Alpha version.

This distribution was originally designed to facilitate the reconditioning of computers donated to humanitarian organizations, starting with Emmaüs communities (which is where the distribution’s name obviously comes from), to promote the discovery of GNU/Linux by beginners, as well as to extend the lifespan of computer hardware, in order to reduce the waste induced by the over-consumption of raw materials.

This new version of our distribution is the migration of Emmabuntüs DE4 under Debian 12 Bookworm supporting a better handling of both the UEFI and the Secure Boot thanks to an update of our refurbishing key in order to support saving and cloning operations with the Secure Boot option. These improvements will be back-ported to EmmaDE4 during its the next update. 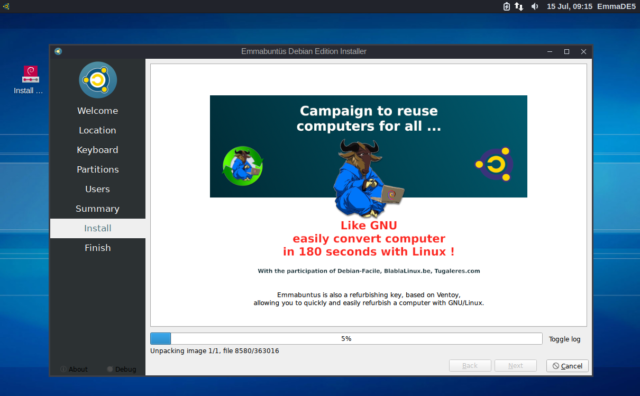 We take advantage of this new version to remove obsoleted software and to clean up some of the less useful and dual-use embedded software.

For this version Alpha 0, the following and improvements and fixes have been implemented :

This version will be available from July 18th 2022, on this download page download.emmabuntus.org