On January 11th 2022, the Emmabuntüs Collective is happy to announce the release of the Emmabuntüs Debian Edition 4 1.01 update (32 and 64 bits), based on the Debian 11.2 Bullseye distribution and supporting both Xfce and LXQt desktop environments.

This new update of our distribution brings the addition of the Ventoy utility as part of our reuse campaign launched in early September 2020 in collaboration with our friends from Debian-Facile and Tugaleres.com in France, as well as Blabla Linux in Belgium, as we have just put online a second version of our refurbishing USB flash drive now based on Ventoy. 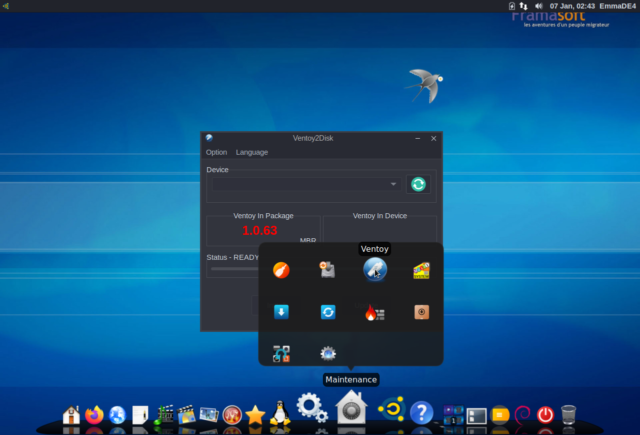 The advantage of using Ventoy instead of MultiSystem is that it allows the creation of this key on GNU/Linux and Windows, which was not the case before. Moreover the creation of the key is easier with Ventoy, as explained in this tutorial.

The interest of such a key is to allow mass reconditioning of computers very easily and quickly – in the order of 2 to 10 minutes – by cloning in a semi-automatic or now fully automatic way either a pre-configured GNU/Linux system that we provide via this page, or your own system that you can create by following this tutorial for the realization of a clone compatible with our key. 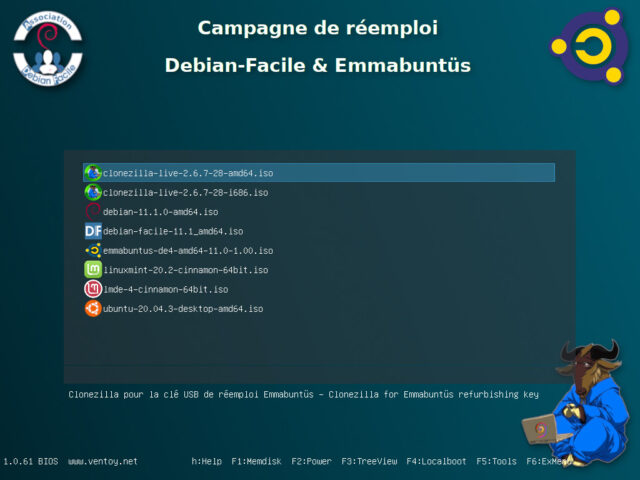 This new version will be the basis for our future Debian 12-based Emmabuntüs DE5, for which we will start testing in the coming weeks.

We are currently looking for testers for this future version, as well as ideas for improvements. If you are interested please contact us via this page. Thanks in advance.

For this version 1.01, the following fixes and improvements have been implemented :

This version will be available from January 11th 2022, from this download page download.emmabuntus.org