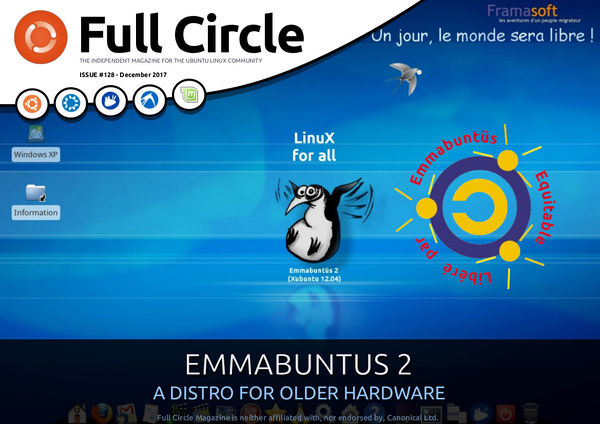 Emmabuntus is a French Linux distribution based on Debian 9 and available with either the Xfce or LXDE Desktop Environment. There are 32-bit & 64-bit versions available. On its website at http://emmabuntus.sourceforge.net, it claims that “the distribution was designed to facilitate the refurbishing of computers given to humanitarian organizations, especially Emmaus communities, and to promote the discovery of GNU/Linux by beginners.” This distribution has both impressed me but also disappointed me slightly. Overall, this is a fairly young distribution which has room to grow, and with great potential where the sky’s the limit. The reason I say that I’m both impressed but also disappointed with Emmabuntus is that I tried it on an older PC to test to see if their claims hold true, and this is where I had a bit of a problem. I’ll get to the details later, first I need to point out how I tested this OS.

To test this system, I figured I’d use the operating system for about a week in an older, early 2000’s PC originally with Windows XP, and, to contrast, I also used my current PC with 1-3 year old hardware. I’ll give my experience on both computers, but you should know that the bulk of my testing was done on the newer machine.

Emmabuntus can be run from a Live CD/DVD if you so desire – which makes it an ideal way to test it. However, if you want to install it on your computer, then the process is fairly easy. The Emmabuntus installation is based on Debian installation. If you come from the Ubuntu world then the installation will feel a bit different but overall the process is fairly simple. I had a couple of problems during installation on the older computer, but it ran very smoothly on the newer one. On the new computer, I successfully installed the system in less than 25 minutes, while on the older one I had to try 3 times until I finally had a good running system, in under an hour. Detecting my hardware was a breeze in my newer PC, and good-to-fair with the older PC.

Here is where my testing with the older computer ends as I ran into a rather crucial problem and I didn’t feel like it was worth it that I continue the testing on the older computer. The problem was with the Wi-Fi – I couldn’t get it to connect no matter what I tried. I don’t think it was a problem with the hardware because I actually used 3 different Wireless cards at 3 different times and all of them showed similar results. The Wi-Fi cards were able to find my network, but then, after I would type in the password, they could never connect. After trying three different Wireless cards, I gave up and stopped the testing with that computer. With the newer computer, I never ran into that problem. On the contrary, everything from here on with the newer computer ran very smoothly and left me very impressed. My regular everyday use was extremely pleasant on my newer PC. Even the occasional system-wide updates were quick and easy. Side by side snapping of windows comes enabled by default. One thing that I didn’t realize I’d missed, because I hadn’t enjoyed it after it was taken out of Ubuntu, is the Screen-saver that comes standard with Emmabuntus. It was a nice nostalgic touch. You see, newer monitors no longer have a need for a screen saver; the newer monitors don’t need “saving” from a blank screen or from the same unchanging screen, that’s why they’ve been removed from most modern distros.

This distribution comes pre-loaded with lots of software that I’ve used throughout the years but also with lots of software that I’d never used before. The version that I tested came with the Xfce desktop environment and was really easy to use. There is a pull-down menu from the top left, but it also comes with a dock-down at the bottom which can make the transition for a Mac OS X user very pleasant. Its default file manager is Thunar 1.6.11. It comes with most of the standard software that you would expect from most Ubuntu derivatives, but then there are a few more little bits of cool software sprinkled throughout. For example, it comes with Firefox AND Chromium for web browser choices. Then, for all of your bit-torrent needs, you can choose between Transmission & qBittorrent. There are 17 apps under the “Graphics” category, which includes stuff like digiKam, Fotoxx, E-Book Viewer, GIMP, Inkscape, Pinta and more. There’s a multi-media category with 25+ apps, some of which include Audacity, Clementine, tuxguitar and VLC just to name a few.

There’s an education category with 11 apps, Development, Office, System, Accessories and WINE categories, and a few others that I haven’t mentioned.

I was pleasantly surprised to find a few apps that I ordinarily don’t find on most default distributions. Apps such as VLC, Sound Juicer, KeePass X, a GUI USB-Image Writer & MultiSystem (for easy installation of multiple Operating Systems onto a single USB flash drive), Adobe Flash, and many, many more. Overall, I was really impressed with the selection of software out of the box. If you happen to need any extra software, then you’re in luck because it comes with Synaptic Package Manager and Gdebi, and you can even install games through a default installation of Play-On-Linux, which I thought was pretty cool. I was able to install a few additional apps and the process was easy, painless and quick.

All in all, I would definitely recommend this operating system if you have a not-too-new computer, but it left me a little disappointed with a 15 year old computer. Because restoration of older machines is one of their claims, I need to deduct a whole star in my review of Emmabuntus. Other than this very crucial deal that I encountered connecting to the internet with an older PC, I really liked every other aspect of Emmabuntus and can see myself using it as my default go-to computer.

Many thanks for your Emmabuntus DE review in FCM# 128, and sorry that you had to face problems with the Wifi connection on your old computer.

As a matter of fact, another person reported a similar issue around the same time, with 3 different Wifi USB sticks, and we were able to fix the problem by using the workaround described here :

We plan obviously to include this fix in the next release of Emmabuntus DE.

Thanks again for your support and our best wishes for this new year.

Yves for the Emmabuntus Collective