Emmabuntüs is a great find if you are looking for an all-around Linux operating system that keeps legacy computers out of the trash heap and is easy to use with no setup or regular Internet access required.
This distro is not one whose name is readily recognizable. Hidden from popular view, it’s seldom spotted by product reviewers. Yet it has fulfilled a range of user needs for years.
Its obscurity keeps it from reaching the potential it has to attract the attention of distro hoppers looking for a better OS. No doubt, most distro rummagers wrongfully assume that its odd name reflects an unworthy performance.
Unless you take the time to browse its unassuming website descriptions, you miss its value. Emmabuntüs Linux is a worthy computing rose lying in wait among the weeds.
Emmabuntüs is a desktop Linux distribution featuring the Xfce desktop. Initial versions of this distro were based on Ubuntu Linux, but developers switched to Debian along the way.
In a crowded computing world with lots of Xfce-based distros, this one is particularly well done with a wide range of uses.

The latest release, on July 15, is an updated computing platform based on Debian 10 Buster, the Stable Branch. Release Candidate 3 (RC3) is solid and is available in both 32-bit and 64-bit versions. The 32-bit version is particularly significant given that one of the goals of this distro is to keep older computers with less capable hardware fast and productive.
The final version of Emmabuntüs Linux Debian 3 is set for release in September. It is beginner-friendly but well suited for all users, including Linux veterans.
Emmabuntüs is reasonably light on resources so it can be used on older computers. The developers started this distro to help a growing organization of volunteers to refurbish used computers donated to humanitarian associations. 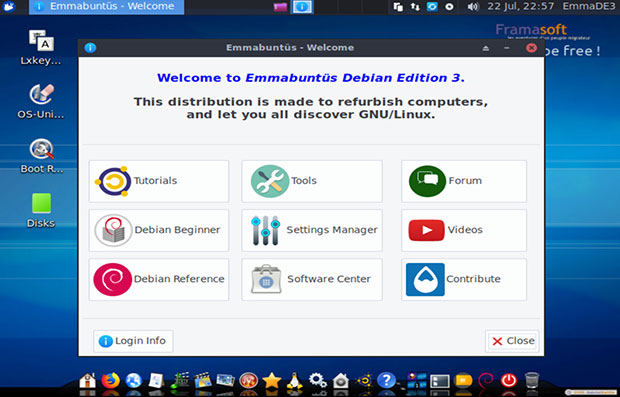 Call up the Welcome screen for quick loading of tools, tutorials and user guides.
Emmabuntus has almost no learning curve, thanks to a well-tuned integration of the Xfce desktop.

The distribution gets its name from the originally targeted users, the Emmaus community. Emmabuntüs is developed by a team based in France.
Emmaus is a secular organization that arose long before the computing age flourished. The group grew from an international solidarity movement founded in Paris in 1949 by Abbé Pierre, a Catholic priest. He was a member of the Resistance during World War II. Communities around the world have kept the name because of its symbolism.
Many of the initially targeted users were school communities in impoverished areas with little access to the Internet, especially wireless and high-speed networks. So school users needed a wealth of preinstalled software to insure the computers students used remained productive without the constant need to download software.
Thus, you will find volumes of useful and effective educational and productivity packages included. That also makes Emmabuntüs Linux an ideal modern choice for parents looking for a computer system for school-aged kids without needing to monitor their Internet use.

A sort of shared irony exists around Emmabuntüs Linux’s development. The lead developer’s name is published simply as “Patrick d’Emmabuntüs.” His full identity is a secret, just as those who comprise the depths of its user base lurk in the shadows of Linux Land.
“As far as our user base is concerned, we don’t know exactly who they are because we get very [little] feedback on our forum. But we believe they are the persons refurbishing their own old computers, or [computers for] one of their family members and especially for their children,” he told LinuxInsider.
As of today, the biggest project using Emmabuntüs Linux is in Togo where, together with the YovoTogo and JUMP Lab’Orione associations, the Emmaus community equipped 17 sites. That project includes 12 high schools.
“We believe that 13,000 to 15,000 children each year get trained on digital technology on Emmabuntüs,” Patrick said.

This distro is not just geared to school-aged youngsters. The interface is not tweaked to have a childish appearance.
Rather, the Xfce desktop interface is one of the most mature iterations I have seen. What makes Emmabuntüs Linux so suitable for school environments is how it is designed to work out of the box without hands-on IT support.
This distro runs extremely well in live session mode. This can be a handy workaround for underfunded school systems looking for a quick on-ramp to digital technology for students. The installed software is varied enough for users to be productive on individual workstations without the services of a computer network or large hard drives.
This RC version finalizes the streamlining of the embedded applications, brings some new fixes, according to the developers, like boot speed-up in live mode and improvement in the dark/light theme handling. It also supports language and localization in live mode.

On the first run after installation, several start-up applications launch. These include keyboard configuration, dock configuration and non-free software installer. This same setup process is present when loading Emmabuntüs in Live session. 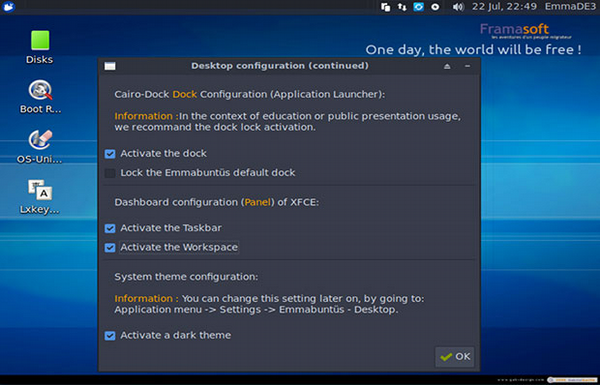 On the first run after installation, Emmabuntus displays several startup applications run to complete the configuration process.
These include panels for configuring the keyboard and dock and a non-free software installer.
This same setup process is present when loading Emmabuntus in Live session.

The top of the screen holds the traditional panel with the menu button on the left. The right part of the panel is a notification area with battery, network and volume indicators, clocks and calendar, and the system menu for functions like shutdown, logout or reboot.
The standard Xfce4 panel menu does not include the Search function by default. For that, you need to run the Applications menu on the macOS-style plank — aka the Cairo Dock — at the bottom of the screen. You can access the standard Xfce 4 panel menu by right-clicking on the desktop. 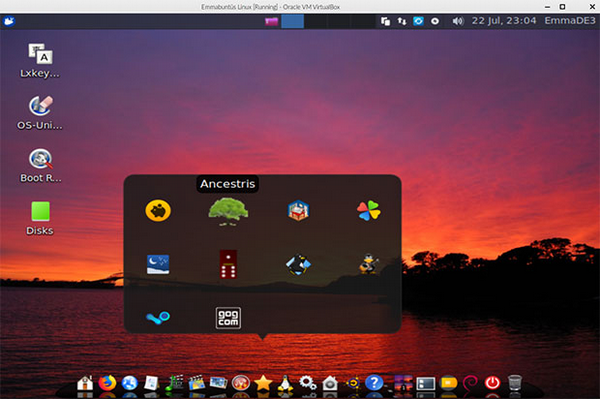 Application menus for separate categories and essential launchers populate the Cairo Dock at the bottom of the screen.

The Xfce 4 menu has at the top a launcher to type the name of an application to run. Clicking on the gear launcher icon opens an Applications menu panel in the center of the screen.
Start typing the letters of an application. The panel display adjusts to show applications that match the partially typed name.
You can scroll through the rows of application icons (much like in the full-screen GNOME application launcher). Another user option is to select a category from the left column of the center display to narrow the range of program names to launch.
Virtual desktop switcher, quick launch buttons, and show desktop button are displayed on the panel by default. No setup is needed.
Several are also on the Cairo dock by default. The default virtual setting is for a single workspace. You can right-click on the workspace switcher in either location to add more virtual workspaces.

Emmabuntüs includes Wine for running Windows programs within the Linux OS. Having Wine preinstalled and configured is an attractive feature for newcomers, especially those coming from a Microsoft Windows background.

Another impressive Emmabuntüs feature is the variety of Linux software titles included. It bundles multiple offerings in each category. For instance, you get version 6.1.5 of LibreOffice suite and Abiword for document creation and editing.

PlayOnLinux also is included. In addition to being able to play games that run on Microsoft Windows using Wine, PlayOnLinux provides a platform for a large collection of Linux-based games. Eight Linux games with an eye on education and creativity are also part of the Games category.

Emmabuntüs provides a generous assortment of everyday productivity tools and educational programs preinstalled. The Packages application in the System menu opens a gateway to legions more software. Package Updater makes it easy for even inexperienced Linux users to keep Emmabuntüs up to date.

Even if you have tried the Xfce desktop in other distros, give Emmabuntüs a try. It is filled with useful tools and usability surprises.